The positive trend on the Nigerian Stock Exchange continued last week, extending the bull-run for the third successive week despite the profit taking witnessed within the period as traders cashed out their recent gains. The seeming pullback is expected to create entering opportunities for discerning investors and traders given that those factors behind the market rally remain intact.

Price correction as experienced by blue chip companies and growth stocks are expected to further strengthen the recovery of these companies’ prices and by implication, the general market.

Meanwhile, the Q3 earnings reporting season officially kicked off with infinity Trust Mortgage Bank releasing its earnings report for the period ended September 2020, showing a decline in gross earnings and bottom line during the period.

The NSE’s V shaped recovery is likely to persist as smart money hits the market with more funds emanating from maturing bills.

There is also the expected September inflation data which is likely to go the way of other negative economic data, because of the impact of the Federal Government’s hike in electricity tariff and fuel price hike expected to reflect on the NBS report. Market players at this point should not forget to play defensive, despite the strong market momentum and rally.

The presentation of the N13.08tr 2021 Appropriation Bill by President Muhammadu Buhari before a joint session of the National assembly may likely support the economic recovery agenda of the administration if properly implemented. Over years, it has become clear that the problem of our national budget is not the amount appropriated, or the intention, but the implementation style which need to change for this 2021 estimate to make the expected impact on the economy. We note that the huge federal budgets over the last five years have not adequately reflected on the system.

However, the budget assumptions and variables, this time, appear realistic if only the fiscal and monetary authorities will complement each other by making policies that will trigger productivity in the economy and government drive revenue by blacking the loopholes and reduce cost of governance. 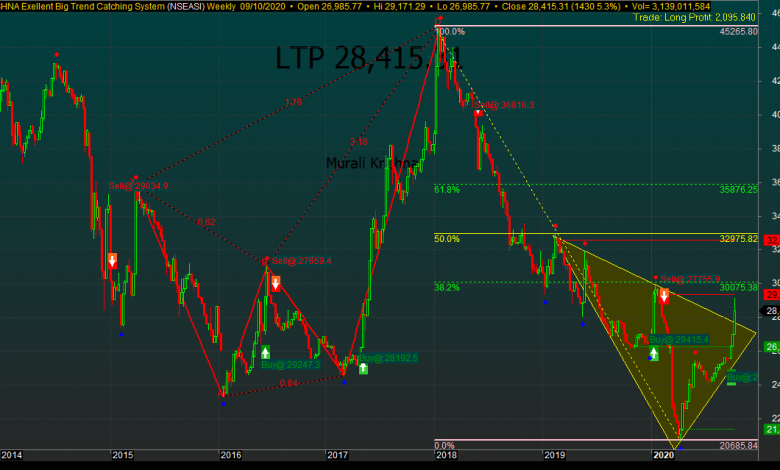 The first full trading week in the last quarter of the year witnessed mixed and volatile sessions of two up markets and three days of bear run, with the benchmark NSE All-Share index starting on a positive note and recording a 0.99% gain, which was sustained on Tuesday with the index recording its highest daily gain of 4.92% in five years. This was short-lived as the index suffered 0.95% decline on profit taking at the midweek, followed on Thursday and Friday by the loss of 0.31% and 0.47% respectively, and bringing the week’s total gains to 5.3%, as against the previous week’s 2.53% gain.

The week’s gain was helped by the increased inflow of funds to equity assets amidst positive sentiments, with the key performance index garnering a significant 1,429.54 basis points, after opening at 26,985.77bps. It touched an intra-week high of 29.171.29bps from its low of 26,985,77bps, after breaking out many resistances on high demand for blue-chip and growth stocks ahead of the quarterly earnings reports. The composite index closed the week at 28,415.31bps, while market capitalization gained N747.1bn, closing at N14.85tr, from the previous weekend’s N14.11tr, representing 5.30% value gain.

During the week, the share price of Learn Africa was adjusted for the dividend recommended by the board, while PZ Cussons Nigeria announced a 10 kobo dividend for the period ended May 31, 2020, despite its negative account.

The top ten advancer’s table for the period under review was dominated by medium cap and growth stocks as reflected in the market breadth showing more gainers than losers in the ratio of 53:14 on a mixed sentiment and strong momentum. Money Flow Index read 95.23bps, up from 88.45bps in the previous week.

NSEASI chart pattern and candlestick formation has revealed strong V shape recovery that was driven by positive sentiment and liquidity to signaled high possibility of trend continuation, despite the pullbacks recorded on daily time frame as the index has tested 29.171.27bps. There is the possibility of it breaking out the major resistance at 29,359.40bp, 30,117.10bps, 31.212.17bps and 32,596.60bps.

The fact that the index is trading above the 50 and 100-Day Moving Average on high traded volume, is another attraction for institutional investors, as it reveals strength in the market, just as the index is set to cross Fibonacci retracement line of 38.2% that is the next resistance level.

However, we envisage an uptrend in the midst of profit taking and scorecards hitting the market, given that the money flow index on a weekly chart is reading 95.23 points, with MACD remaining in the bullish zone. The buy volume for the period stood at 65% and sell position at 35% with total transaction index at 2.38.

All the sectorial indexes were bullish, led by the NSE Banking index’s 7.83%, followed by the NSE Industrial Goods that chalked 2.72%. The Consumer Goods, Oil/Gas and Insurance indexes recorded 2.02%, 2.01 and 1.96% gains respectively.

The general market outlook in recent times looks positive in the short-term; following which investors should take short-term and medium-term positions and diversify their portfolio along long-term trades to protect capital. This they can do by considering sectors with high upside potentials and strength as earnings start hitting market any moment from now.

Activities during the week, in terms of volume and value, were up by 105.23% and 109.29% respectively after investors traded 3.14bn shares worth N35.37bn, compared to the previous week’s 1.53bn units valued at N16.9bn. Volume was driven by trades in financial services, oil/gas and Industrial goods sectors, specifically Zenith Bank, FBNH, UBA Sterling Bank and Eterna.

The best performing stocks during the period under review, were Eterna and International Breweries, which gained 32.48% and 21.03% respectively to close at N3.63 and N4.72 each on low price attractions and market sentiments. On the other hand, UACN Property and Tripple Gee and Company lost 11.96% and 10% respectively, at N0.81 and N0.36per share on market forces and profit taking.

We expect a rebound on expected inflow of funds and corporate earnings in the midst of pullbacks and profit taking as all eyes are on Q3 numbers that kick off with early filer Infinity Trust Mortgage Bank.

Profit taking is as old as the stock market. Any price correction at this phase of market recovery will support the upside potential, especially with many fundamentally sound stocks remaining underpriced, and the dividend yield of major blue-chips continuing to look attractive despite the recent weeks rally. We expect speculative trading to shape the market’s direction.

Meanwhile, the home study packs of Strategies and How to Invest Profitably in This Changing Market Dynamics: Mastering Earnings Season for Profitable Trading and Investing in any market situation/Cycleare available. To obtain your copy send ‘Yes’ or ‘Stock’ to 08028164085, 08032055467, 08111811223 now.