The local bourse halted its bullish run, as it recorded its first loss in eight consecutive sessions on Thursday on the back of profit-taking pressure.

The trend that crashed the bulls’ party was predominantly observed on the stocks of Dangote Cement, falling by -0.6 per cent and Access Bank that recorded -2.3 per cent depreciation in price.

Consequently, the All-Share Index contracted marginally by -0.1 per cent to 25,304.25 basis points, and accordingly,  Month-to-Date (MtD) gain moderated to 2.5 per cent while the Year-to-Date (YtD) loss increased to -5.7 per cent.

At the close of the session, as the market capitalization also took hit, the equity investment at the domestic bourse shrank by N14 billion to close at N13.201 trillion from N13.215 billion it closed activities the previous session.

Across sectors, performance was mixed following 0.6 per cent gain in the Insurance index and 0.5 per cent rise in Consumer Goods index against -0.4 per cent loss in the Industrial Goods index and -0.3 per cent decline in banking index. However, the Oil and Gas indices remained flat.

It should be noted however that amidst the bearish outlook, market turnover came out stronger relative to the previous session as traded volume and value appreciated by 39.05 per cent and 16.18 per cent respectively.

Market sentiment, as measured by the market breadth, was negative with the emergence of 19 declining stocks outnumbering 11 gaining counterparts. 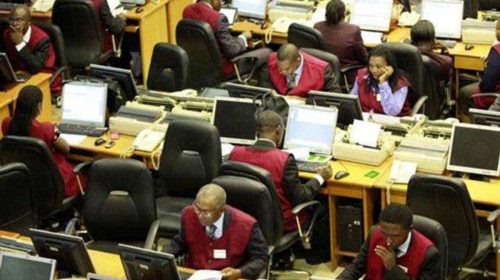 Data from the Nigerian Stock Exchange (NSE) shows that Nigerian breweries recorded the highest gain of N1 to close at N2.73 per share. MayBaker followed with N0.27 gain to close the session at 3 per share.

In terms of market turnover, the duo of UACN and UBA led volume and value chat.

Activities on both stocks represent 54.45 per cent of total volume of trade throughout the session and 49.61 per cent of aggregate transaction value for the day.