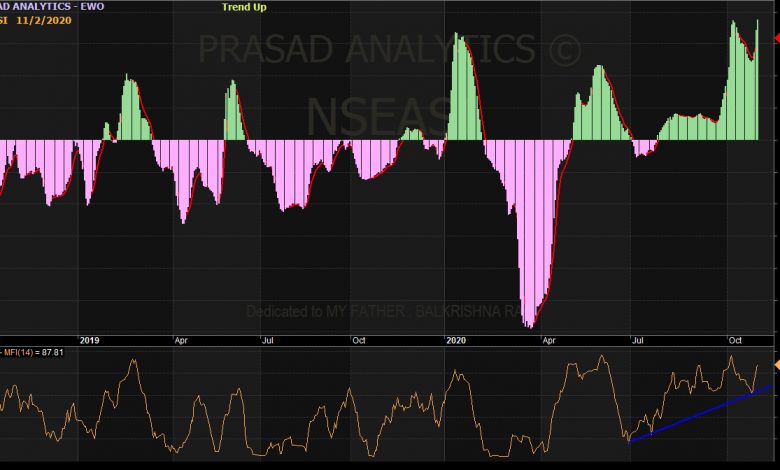 Nigerian equity prices suffered a marginal decline on Monday as volatility continued amidst profit taking that halted the previous six sessions of back-to-back gains, on less-than-average traded volume and mixed sentiment, kicking off the new month of November. Oil slumped to five-month low before retracing the worst of its losers. This was as a result of the second wave of lockdown on rising.

With the extension of release date deadline by the regulator, more companies made available their quarterly earnings to market during and after the day trading session.

Fidelity Bank, a leading second tier bank, released its Q3 scorecard with mixed numbers, while earnings report from companies in the consumer goods and healthcare sectors were impressive and the market reacted positively to the numbers. This was especially true of the results from Fidson Healthcare, GSK, May & Baker, Dangote Sugar, Flourmill, NASCON and Northern Nigerian Flour Mills.

Despite the fact that companies in the consumer goods sector are posting mixed performance as shown by financials released so far, many of them have posted impressive and surprising numbers that beat market expectation. This has given an insight what the full year and last quarter results will look at year-end, knowing that this quarter’s activities and associated festivity will further boost performance, despite the seeming economic downturn.

Meanwhile, Monday’s trading started marginally on the downside in the morning and oscillated between mid-morning and afternoon before pulling back on profit booking irrespective of impressive and mixed earnings from companies mentioned above. The selloffs in the medium and high caps stocks however impacted the session negatively, pulling the NSE index to an intraday low of 30,364.15 basis points from its high of 30,554.27bps on negative market breadth.

The session’s technicals were weak and mixed with volume traded lower than the previous session in the midst of breadth favoring bears and mixed buying sentiment, as revealed by Investdata’s Sentiment Report showing 61% ‘buy’ volume and 39% sell position.

Total transaction volume index stood at 0.93 points, just as the energy behind the day’s performance remainedstrong, with Money Flow Index jumping to 87.81 points, from the previous day’s 80.98 points, an indication that funds entered some stocks despite the general market closing lower.

Performance indexes across the sectors were mixed, as the NSE Oil and Gas led the decliners after losing 1.21%, followed by Banking and Industrial Goods that fell by 0.78% and 0.06% respectively, while NSEInsurance and Consumer Goods gained0.70% and 0.57% respectively.

Market breadth turned negative as decliners outnumbered advancers in the ratio of 26:22, while activity in volume and value terms were down by 53.4% and 63.8% respectively, as investors traded 376.65m shares worth N3.8bn, from the previous session’s 807.81m units valued at N10.5bn. Volume was driven by trades in Fidelity Bank, Zenith Bank, Dangote Sugar, Sterling Bank and UBA.

We expect this volatility to continue, with the deadline for submission of earnings reports extended, as investors continue to analyze the Q3 numbers released so far and readjust their portfolios on the strength of sector and company’s performance. There was a reversal in direction at the end of trading as NSE index action and indicators consolidated, turning up to look the same direction on above average traded volume and positive buying sentiment.

The mixed intraday movement is likely to persist for the rest of November in the midst of expected earnings, profit booking, as well as the mismatched economic policies and negative macroeconomic indices. This is also against the backdrop of the fact that the capital wave in the financial market may persist in the midst of relatively low-interest rates in the money market, high inflation, negative Q2 GDP of 6.1% and unstable economic outlook for the rest of 2020 as government and its economic managers are going front and back with mismatched policies and implementations.

We see investors focusing on portfolio adjustment and rebalancing by targeting companies with strong potentials to grow their Q3 numbers and dividend on the strength of their earnings capacity as end of the year is at the corner, considering the seasonal swing trend that are associated with the last quarter of the year.