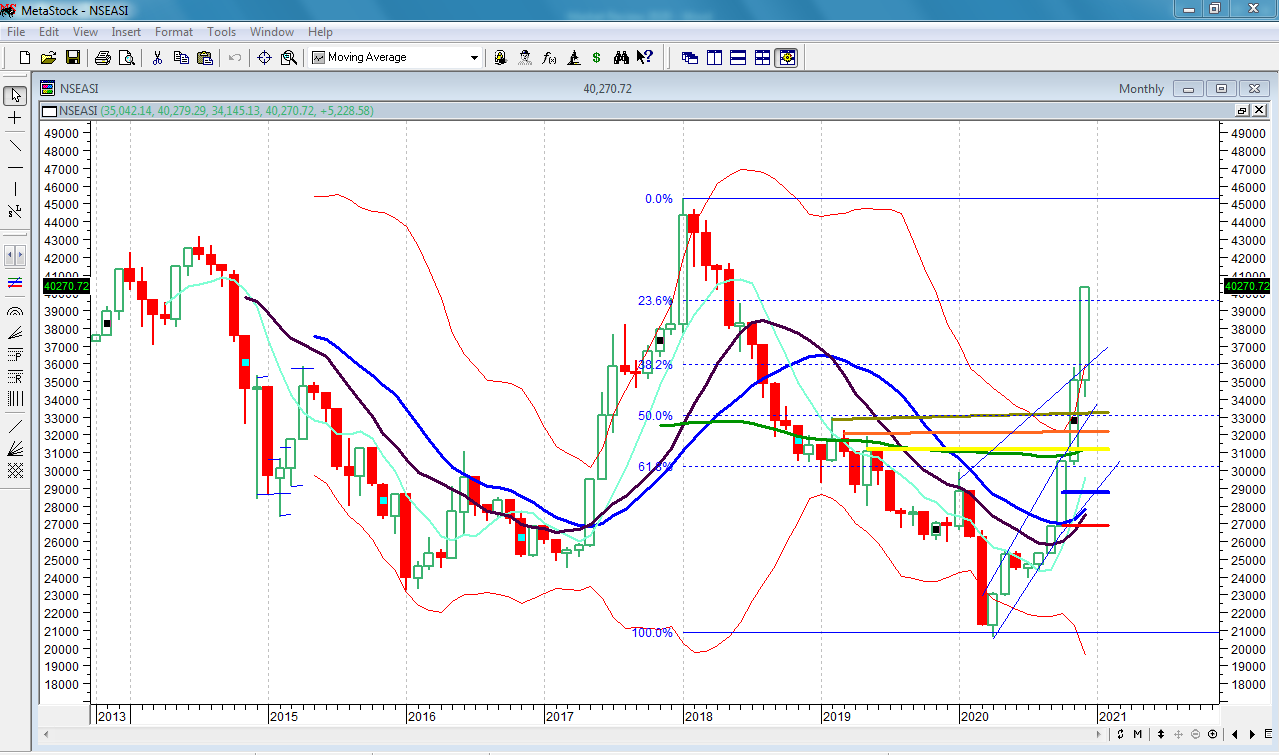 The benchmark All-Share index of the Nigerian Stock Exchange closed the year 2020 yielding better returns than the 47.19% and 42.3% it did in 2013 and 2017 respectively, at 50.03% on the back of positive sentiments and high system liquidity, despite the prevailing weak economic fundamentals arising from the Coronavirus outbreak that had affected global and domestic spaces.

The strong equity market recovery after touching an 11-year low due to panic selling in the wake of the COVID-19 pandemic outbreak, the index case of which entered into the country on February 27, 2020, thereby extending the 2018 and 2019 downtrend of the NSE All-Share index. The market however rebounded in April 2020 on news of recovery in oil prices at the international market, which was enhanced by the better than expected 2019 corporate actions and quarterly earnings of listed companies, despite the economic downturn that pushed the economy into a second recession in four years.

Investdata recalls that the improved inflow of funds into the equity space followed the decision of the Central Bank of Nigeria’s Monetary Policy Committee to crash rates thrice in one year, in a bid to force bank lending to the private sector at a cheaper cost and in the process drive economic recovery and growth. Also important is the fact that the CBN’s decision to crash rates of fixed income instruments at a time inflation was going north, inspired domestic retail and institutional investors into the equity space in their bid to hedge against inflation, with the undervalued state of the market as a veritable attraction.

The market however had other challenges in 2020, with serious negative implications for the economy, particularly the rising inflation and inconsistencies in government policies, or summersaults in some cases. There were the twin evil of hikes in electricity tariffs and pump price of petrol, both of which were major drivers of headline inflation throughout the year under review.

These were made worse by the continued closure of the nation’s land borders until the twilight of the year, and rising insecurity, especially the Boko Haram insurgency in the northeast, banditry and cattle rustling in the northwest that kept farmers from their farms, following which they could not harvest, in addition to the increased rate of kidnapping across the country, people identified by victims as Fulani militia who extort ransoms in millions of Naira.

Note that despite the seeming disconnection of the market from the prevailing economic realities, as demonstrated in the fact that the economic contraction did not elicit fear, following which the market rallied on what many believe was investors’ way of saying: “We are not surprised.” But, as rosy as things may seem in the market now, do not lose sight of how things stood back then.

In last year’s outlook report, we noted that “the two biggest enemies of a bull market are higher interest rates and policy summersaults by the regulators and government. At the end of 2020, yields were sharply lower, just as oil price remains on the recovery path to its pre-Covid prices.

Can an unexpected shock to the system suddenly flare up and derail the bull market? Anything’s possible, but that’s a hard strategy to base investment decisions on.

The good thing, however, is that the government and CBN have continued to intensify their interventionists efforts by extending bailout to other critical sectors to mitigate the effects of the pandemic. This is expected to quicken economic recovery as shown by the recent marginal improvement in macroeconomic indices, while further supporting the stock market, as companies in critical sectors, especially, rebound with better performance and stronger numbers.

Trading for the year 2020 started on a positive note in January, which was characterized by strong buying pressure and positive sentiments for low price stocks as a result of the 2018 and 2019 bear run, when share prices (especially blue-chips), volume, and value recorded new highs, as virtually all the indices rallied.

There was however a reversal of this trend in the following month with a pullback that lasted for two months, touching a low of 20,651.59bps in March, before retracing up to experience a strong recovery that was sustained for the rest of the year.

This trend made the second half of the year quite interesting for many traders, especially with the end of the year rally that closed the month of December green. The Santa Clause rally effect was mixed on the exchange in the final trading sessions of the year.

Following the bull ascendance and rallying equity prices, the NSE ranked the world’s best performing bourse, as investors recorded huge gains during the year. The year’s trading pattern offered insights into the 2020 growth, which was supported by the better-than-expected quarterly earnings reports in the midst of weak macroeconomic indices. This encouraged an influx of more domestic retail and institutional investors and traders into the market as reflected in the yearly Investdata sentiment report showing buy volume of 94% and 6% sell position, as against the situation in 2019 when buy sentiment stood at 12% and sell volume of 88%.

The market’s uptrend lasted for nine months after the declining in three months of the year- February, March and June.The other leg of the market (the primary) segment recorded a lull in activities, compared to the previous years as rights Issues, Initial Public Offerings were few due to the economic uncertainties that prevailed during the period.
The market’s sectoral indices performance were bullish, as eight indexes closed in the positive region at the end of the year, led by industrial Goods which scooped 90.81%, followed by the NSE Premium index, 64.01%; just as the NSE Insurance and Main Board indexes garnered 50.61% and 49.84% respectively to topped the chart. Notwithstanding the year’s bull-trend, two indexes closed the year red (see chart below). 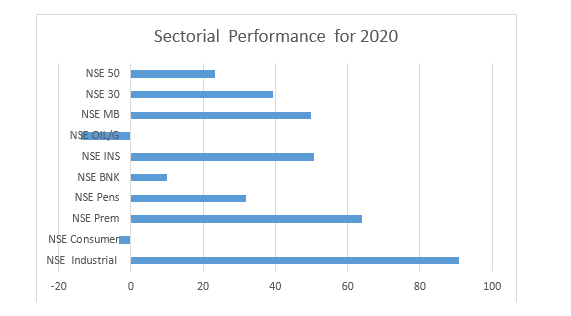 Following the NSE 30 and Pension indexes reflected the positive sentiment for high cap stocks and dividend-paying companies, improved liquidity, and high investor confidence, just when the labour market and consumer purchasing power remained weak with the unemployment rate rising, due to the high inflation rate.

A total of 48 stocks closed the year higher, with 11 of them growing their share prices by over 70%. The five best-performing stocks for the year were: Neimeth Pharm, with share price growing by 259.68%; FTN Cocoa, 230%. The share prices of Airtel Africa, Livestock Feeds and United Capital recorded gains of 184.98%, 178% and 96.25% respectively.

A further breakdown showed that the low cap stocks from Agribusiness and healthcare sectors dominated the best performance table for the year 2020, a situation that may not likely continue in the New Year with an expected rebound in other stocks that had rallied on low price attraction and dividend expectation ahead of the 2020 full year earnings season in Q1 2021, despite weak economic fundamentals.

On the flip side, 34 stocks closed weaker than they opened for the year, dominated by consumer goods stocks arising from the effects of the economic recession that led to weaker purchasing power among citizens. The resultant unsold stocks were made worse by the increased production cost, especially against the backdrop of the power public power supply that makes industries rely mainly on privately generated electricity, as well as the bad road infrastructure that leads to the increased cost of products distribution. Also, these mixed numbers from these companies further depressed their share prices, making them become more attractive stocks. Others were due to unimpressive earnings, negative sentiments, and profit-taking.

What to expect in the New Year

Nigerian Stock Exchange islikely to maintain this trend until end of 2020 full year earnings reporting season, especially as no other investment windows has returns and yields that can match the dividend yields of some listed companies still selling below their fair value. The market is set to breakout the 41,000 resistance level, owing to high cap stocks rallying on the strength of positive sentiment, which is of interest to many investors, considering the weak economic fundamentals.

Data from the National Bureau of Statistics (NBS) showed that Nigeria’s economy had contracted for two consecutive quarters ahead of Q4 GDP data.The Q4 data may likely look up marginally, due to spending during the ongoing festive season and end of year activities, amidst the slight decline in December PMI that stood at 49.6 point from November 50.2 points
We expect that the CBN will in the New Year review its foreign exchange market policy as part of stabilizing price, while checking inflation even at the detriment of economic activities and export drive.
The expected return of foreign portfolio investors this year depends on policy formulation and implementation of the government.

Nigeria’s external reserves is gradually looking up even when production output set by the Organisation of Petroleum Exporting Countries (OPEC), amidst the recovery oil prices at about $51 per barrel, which is way above the Federal Government’s 2020 and 2021 budgetbenchmark of $40pb. This also should support government’s spending plan, which has given insight into what will happen, as government revenue suffered setback, besides the worrisome implementation style of the yearly budget which has not helped matter before now. The sad thing is that under the present government, the situationwould likely persist unfortunately at a time the nation is in dare need of more jobs for its army of unemployed and underemployed populace.

Our 2021 outlook is mixed in the sense that it looks positive but dicey, considering the second wave of Covid-19, despite the ongoing discovery of more vaccines and its distribution. Government should make policies to encourage more listing to deepen the market in order to play its role of driving the economic development by providing platform for long borrowing, regulators should protect investors and collaborate with research companies to provide proper investment and financial education to attract more participants to the market.

Also, if the market is to create jobs for Nigerian youths by engaging in share trading with their little funds with the aid of technology and remote trading, government should reduce cost of trading or transaction to encourage and attract more investors.

Rather than tell you where we think the market will go this year, the purpose of our outlook or report each year is to look at the market from a variety of different perspectives to see whether they are acting as a headwinds, tailwinds, or no-wind. We then use that as a blueprint for positioning in the year ahead. It is not a one-time assessment, though. We constantly monitor each area to look for changes or a continuation of the various trends and provide updates throughout the year. As you will see throughout this review and outlook, most of these factors aren’t unequivocally bullish or bearish for the market, but instead, they are more nuanced.

Again, the current trading pattern in the market offers investors opportunities to position for the short, medium, and long-term, which is why they should target fundamentally sound, and dividend-paying stocks for possible capital appreciation in the new year.