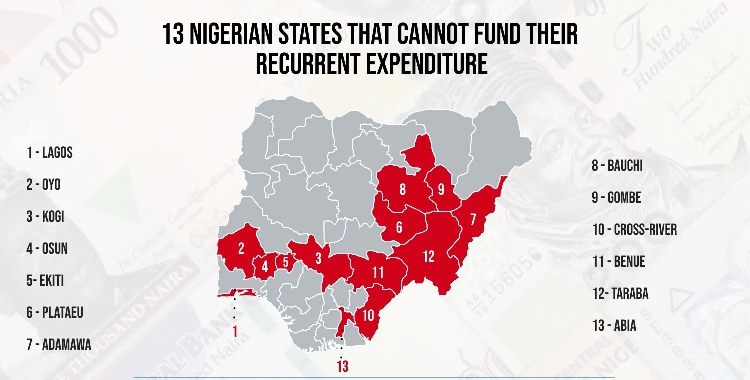 Thirteen our of 36 Nigerian states are fiscally distressed as they lack the revenue capacity to fund their recurrent revenue in 2019, according to the 2020 edition of BudgIT’s State of the States Report.

BudgIT, a civic advocacy society that uses technology to intersect Citizen-engagement with improved governance, announced the release of the report on Thursday.

The report observed that the development could indicate early signs of distress particularly for states in this category who have very low revenue generation capacities.

The report further observed that, out of the remaining 23 states that can meet recurrent expenditure and loan repayment schedules with their total revenue, eight of them have revenue leftovers that are so small (less than N6 billion), that they still have to borrow heavily to fund any meaningful capital expenditure.

The worst-hit in this category, according to the report, are Zamfara, Ondo and Kwara who have N782.45 million, N788.22 million and N1.48 billion, respectively.

Observing that the states are currently in financial distress largely as a result of misplaced priorities and soaring debts, the BudgIT report added that based on their fiscal analysis, only five states in the country – Rivers, Kaduna, Akwa Ibom, Ebonyi and Kebbi – are prioritising capital expenditure over recurrent obligations.

“However, the quality of the capital expenditure still leaves much to be desired as explored in the narratives for the respective state profiles,” the report said, noting that the remaining 31 states in the country prioritised recurrent expenditure according to their 2019 financial statements.

The report also noted that exchange rate volatilities recently triggered by COVID-19 induced shocks have worsened the situation for states who currently have large foreign debt and have also crystallised the risks for those who plan to incur more.

“The implication of this for states is that for every $1 in foreign debt a state owes, it now needs to raise an extra N74.1 from taxpayers to pay it back,” the report said.

“Lagos State, for example, now needs to raise at least N103.46 billion additionally from taxpayers over the lifespan of the same $1.4 billionn foreign debt stock to pay it back due to the devalued naira. That’s less money available for development projects,” the report observed.

BudgIT stressed that dependence on federal allocations portends a bleak future for states as falling crude oil prices, OPEC production cuts and other COVID-19 induced headwinds are set to impact federally collected revenue over the next two years.

To prevent going bankrupt, it, therefore, urged the states to grow their internally generated revenue.

According to the report, Lagos, Ogun and Rivers will be least affected by dwindling federal revenue due to their higher IGR profiles, while Bayelsa, Borno and Katsina would be the worst hit.

Rivers State occupies the number one position on BudgIT’s 2020 Fiscal Sustainability Index as, according to the report, the state was able to meet its recurrent expenditure with only internally generated revenue (IGR) and value-added tax (VAT).

Painting a bleak outlook for the states, the report highlighted that “soaring debt burden, imprudent fiscal planning, and nearly a decade of misplaced expenditure priorities have beaten a clear path to fiscal crisis for a majority of Nigeria’s 36 states”.

Noting that states already face significant human development issues, including poverty, unemployment, underemployment, avoidable disease outbreaks (excluding COVID-19) and a host of third-world problems, BudgIT counselled that to address the challenges, “each state needs to, first and foremost, be a sustainable subnational entity” by generating enough revenue to pay its workers, its creditors and still have significant leftover to cover capital expenditure interventions for solving development issues.

Related Topics:BudgItstate sustainability report
Up Next