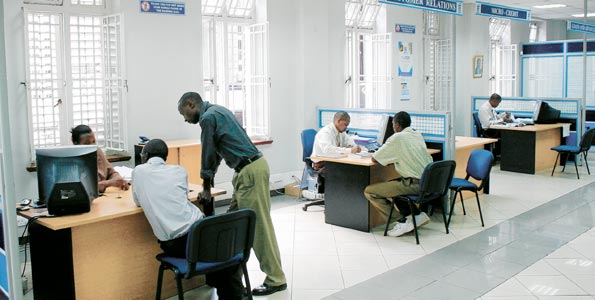 Seven deposit money banks (DMBs) in the country spent a total of N258.13billion on personnel in the first six months of the year, H1’20 results released by the lenders show.

The figure is 4.1 per cent (N10.7billion) more than the N247.47billion the lenders spent on staff in the corresponding period of last year.

A breakdown of the results shows that ETI’s personnel costs dropped by 2.60 per cent to N85.61billion in H1’20 from N87.9billion in the same period of last year.

UBA’s employee benefit expenses rose by 19.87 per cent to N44.6 billion in the first six months of the year from N37.2billion in H1’20. At N38.9 billion, Zenith Bank’s personnel expenses, during the period, were marginally higher than the N38.7billion it spent in H1’19.

Similarly, Access Bank’s personnel and rent expenses increased to N36.3billion in H1’20 from N31.2billion in the same period of last year.

Tier 2 lender, Stanbic IBTC, spent N19.9billion on staff costs in H2’20, virtually unchanged from the N19.8billion it spent in the corresponding period of last year.

Guaranty Trust Bank, likewise, reported a marginal increase in its personnel expenses, as the Tier 1 lender’s results show that staff costs edged up to N18.8billion in the first half of this year from N18.6billion in the same period of last year.

At N14.1billion, FCMB’s personnel expenses in H1’2020, increased by 1.32 per cent from the N13.9billion the Tier 2 lender reported for the corresponding period of last year.

Industry watchers generally did not expect the increase in personnel expenses reported by most lenders for H1’20, given that even before the outbreak of the coronavirus (Covid-19) disease, economic conditions in the country were already challenging due to the sharp drop in price of oil (the commodity that accounts for the bulk of government revenue), a development that compelled lenders to embark on tough cost cutting measures, including laying off of redundant staff and shutting unprofitable branches.

The spread of the virus to these parts appeared to have been an opportunity for some lenders to intensify the cost cutting measures.

The reason is that with the coronavirus lockdown restrictions imposed by the government, which commenced in late March in Lagos, many banks chose to temporarily close branches they considered surplus to requirements in some parts of the state.

Indeed, bank workers took to social media at the height of the lockdown restrictions to complain that their employers were threatening them with mass sack.

The Central Bank of Nigeria (CBN), in fact, issued a press release in April announcing that it had agreed with DMBs to suspend the sacking of bank employees.

The apex bank said: “In order to help minimize and mitigate the negative impact of the COVID-19 pandemic on families and livelihoods, no bank in Nigeria shall retrench or lay-off any staff of any cadre (including full-time and part-time).”

It also directed lenders to first obtain its approval before any staff is laid off in the event that such a measure was absolutely necessary.

“To give effect to the above measure, the express approval of the Central Bank of Nigeria shall be required in the event that it becomes absolutely necessary to lay-off any such staff,” the regulator said.

Still, data released by the National Bureau of Statistics (NBS), last week, indicate that the banking sector reduced its total headcount to 94, 498 as of June 2020 from 96, 975 in March of the same year.

Specifically, the numbers show that DMBs sacked about 2,477 of their employees in the second quarter of 2020, as major cities in the country complied with the lockdown restrictions imposed by the Federal Government to contain the Covid-19.

New Telegraph’s analysis of the NBS data indicates that contract staff, which represent 43 per cent of total bank staff, constituted the most affected by the job cuts, making up 2, 239 out of the 2, 477 losses recorded in the period.

Further review of data from the NBS revealed that banks had laid off a total of 6, 408 contract staff since December 2019 The NBS figures also indicate that banks have been employing more contract staff in recent years, as part of efforts to cut costs.

However, employees designated as contract staff are always among the first group of workers to be sacked, as their contracts do not provide them with the conditions of service enjoyed by permanent staff.

For instance, in a report titled: “The Productivity Agenda – Moving beyond Cost Reduction in Financial Services,” PricewaterhouseCoopers (PwC) urged banks to look beyond cost-reduction and restructuring measures for profitability and long-term survival.

The multinational professional services network argued in the report that traditional cost-cutting strategies come with inherent limitations, which it said, affect the overall impacts of the strategies on corporate performance and longterm sustainability.

It stated: “With banks struggling to improve their return on capital, many institutions are being forced to restructure and cut costs. Even in the asset management industry, where return on equity is higher than the financial services industry as a whole, there is downward pressure on margins and profitability.

“Cost cutting will only deliver so much. If financial institutions are to improve profitability in the longterm, they need to fundamentally improve the productivity of the enterprise.”