The Changing Landscape for FX Sales 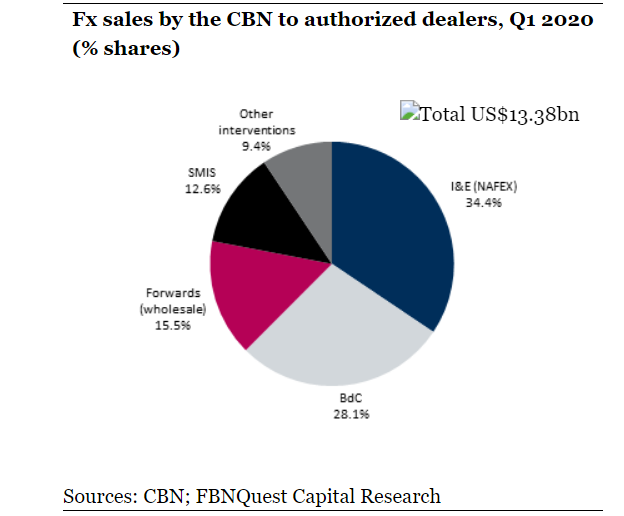 Our chart covers Q1 2020, when fx was available and the CBN was supplying its various windows with sales above US$13bn to authorized dealers. It was most active at the investors’ and exporters’ window (I&E, or NAFEX.). It has not supplied this market since late March, and weekly inflows have slumped to about US$100m from more than US$1bn. The CBN was the largest seller in Q1 at the I&E as the maturities of its open market operations (OMO) bills gathered momentum and foreign portfolio investors (FPIs) departed in large numbers.

The bureaux de change were the second largest destination of CBN sales in Q1. These transactions were halted with the suspension of international travel in March but may resume now that the FGN is talking of reopening borders for air traffic. Secondary market intervention sales (SMIS) to retail, both spot and forward, would surely have become the leading destination in Q2.

While the CBN does not quantify its total exposure to swaps within its series on gross official reserves, it does share quarterly inflows and outflows under such arrangements. We see that it sold US$600m in the quarter under review, and US$470m in the previous three months, to meet its swap obligations. 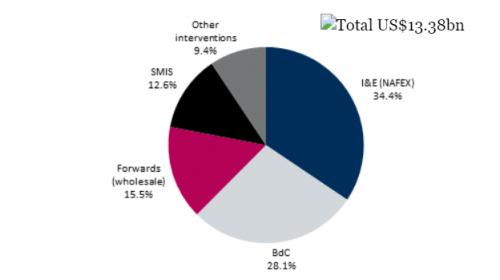 When we move onto fx flows through the economy to cover autonomous sources as well as the CBN for Q1 2020, we have a total inflow of US$42.7bn and a total outflow of US$19.0bn. Such an inflow would probably cover fx demand when we recall that imported goods and services in 2019 amounted to about US$100bn.

The weakness in the oil price and the change in stance by FPIs have since intervened, and the inflow has become inadequate to meet (shrinking) import demand. The result has been the pipeline.