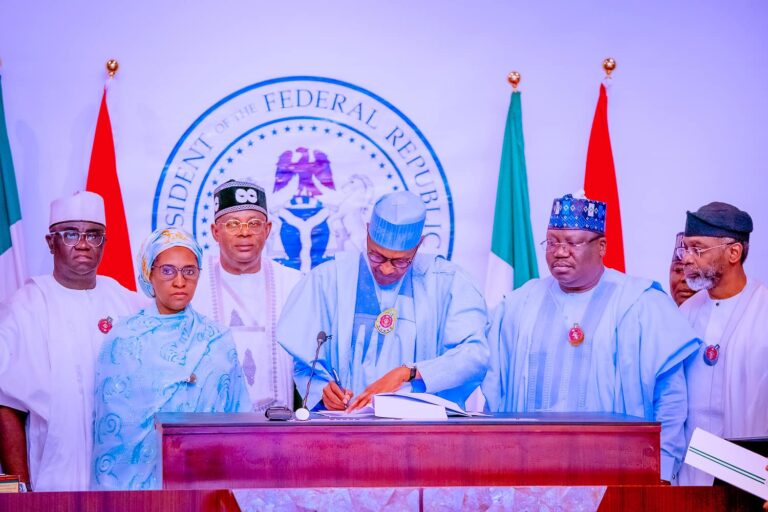 The President, during a brief signing ceremony inside the Council Chambers of the Presidential Villa, Abuja, had senior government officials present.

President Buhari received the Bill, which was passed by both the Senate and House Representative last week, from his Senior Special Assistants on National Assembly Matters, Senator Jide Omoworare (Senate), and Nasiru Ila (House of Representatives).

President Buhari said the implementation of the 2023 budget would commence without delay.

He charged the National Assembly to consider the re-visiting the changes made to the proposal by the lawmakers.

He, however, directed the Minister of Finance, Budget and National Planning to engage with the Legislature to revisit some of the changes made to the Executive budget proposal.

What the President is Saying:

The President said: “It is my hope that we will receive cooperation in this regard from the National Assembly.

“The 2023 Budget that I have the honour of signing into law today provides for aggregate expenditures of N21.83 trillion, an increase of N1.32 trillion over the initial Executive Proposal for a total expenditure of N20.51 trillion.

“As is customary, the Honourable Minister of Finance, Budget and National Planning will subsequently provide more details of the approved budget and the supporting 2022 Finance Act.

“It is clear that that National Assembly and the executive need to capture some of the proposed additional revenue sources in the fiscal framework. This must be rectified.

“I have also noted that the National Assembly introduced new projects into the 2023 budget proposal for which it has appropriated N770.72 billion.

“The National Assembly also increased the provisions made by Ministries, Departments and Agencies (MDAs) by N58.55 billion.

“Nevertheless, considering the imminent transition process to another democratically elected government, I decided to sign the 2023 Appropriation Bill into law as passed by the National Assembly to enable its implementation to commence without delay.

“I have however directed the Minister of Finance, Budget and National Planning to engage with the Legislature to revisit some of the changes made to the Executive budget proposal, and it is my hope that we will receive cooperation in this regard from the National Assembly.

“I also urge the National Assembly to reconsider its position on my proposal to securitize the Federal Government’s outstanding Ways and Means balance at the Central Bank of Nigeria (CBN).

“As I stated, the balance has accumulated over several years and represents funding provided by the CBN as lender of last resort to the government to enable it to meet obligations to lenders, as well as cover budgetary shortfalls in projected revenues and/or borrowings.

“I have no intention to fetter the right of the National Assembly to interrogate the composition of this balance, which can still be done even after granting the requested approval.

“Failure to grant the securitization approval will however cost the government about N1.8 trillion in additional interest in 2023 given the differential between the applicable interest rates which is currently MPR plus 3% and the negotiated interest rate of 9% and a 40year repayment period on the securitised debt of the Ways and Means”, he said.

In case you missed this:

On 7 October 2022, President Buhari had presented the 2023 fiscal budget to the joint session of the National Assembly, where he proposed an annual budget of N20.51 trillion for the year 2023, a 19.8% increase when compared to the N17.13 trillion approved for 2022 including the supplementary budget.

President of the Senate, Ahmad Lawan, had last week explained the delay of the the passage of the appropriation was due to some anomalous figures presented by the executive to the legislature for consideration.

Witnesses to the budget signing

Senior members of government who joined him at the signing were the Senate President Ahmad Lawan; Speaker House of Representative, Femi Gbajabiamila; Secretary to the Government of the Federation, Boss Mustapha; and Chief of Staff, Ibrahim Gambari.