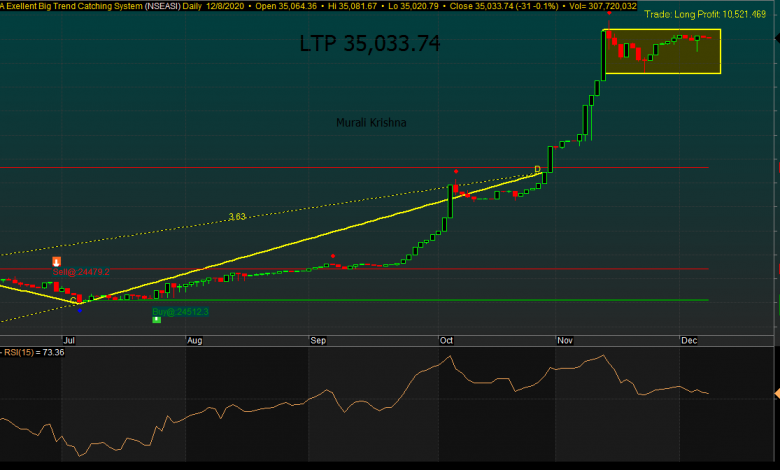 Mixed performance and portfolio reshuffling continued on the Nigerian Stock Exchange (NSE) Tuesday, with the composite All-Share index closing flat, but with less momentum. This was despite the persistent profit-taking and cautious trading as the market awaits positive trigger for either a reversal of trend, or continuation of pullbacks.

The side trending mode of the market is a pointer to the wait-and-see attitude of investors.  However, the current daily chart is still trading above the shortest moving average of seven days, after the index has tested the 20-DMA last Friday which is the recent strong support level.  There are also the less-than-average traded volume and negative breadth which are indicative of indecision among traders; as well as the pullbacks and current mode of the market that now create ‘buy’ opportunities for discerning traders and investors. A breakdown of the 20-day moving average will confirm the short term distribution phase of the market.

The question on the lips of most investors and traders today is: will the market rally again? The answer is: ‘YES,’ but only after this seeming correction and profit booking that are as old as the market, especially after huge rally in November and recovery that started since April.

Tuesday’s trading started marginally down and maintained a flat mode throughout the session   despite oscillating on selloffs and cautious trading, which pushed the benchmark index to an intraday low of 35,020.79 basis points, from its high of 35,081.67bps, before closing the day slightly below its opening figure at 35,033.74bps.

The day market technicals were negative and mixed, as volume traded were slightly lower than the previous day in the midst of negative breadth and mixed sentiment as revealed by Investdata’s Sentiment Report showing 79% ‘sell’ volume and 21% buy position. Total transaction volume index stood at 0.62 points. This is just as the energy behind the day’s performance was relatively strong with the Money flow index looking down to read 55.18pts, from the previous day’s 64.19pts, an indication that funds left the market as profit taking persist.

The day’s downturn was attributed to selloffs and profit taking in stocks like Zenith Bank, FBNH, Flourmills, Lafarge Africa, Access Bank, Guinness and Nahco, among others, which mildly dragged Year-To-Date gain down to 30.52%. Market capitalization YTD gain stood at N5.35tr, representing a 40.99% growth above the opening value.

Performance indexes across the sectors were mixed, except for the NSE Insurance and Oil/Gas that closed higher by 0.45% and 0.26% respectively, while NSE Banking led the decliners after losing 0.34%, followed by the NSE Industrial and Consumer goods that were down by 0.10% and 0.09% respectively.

Market breadth was negative, as losers outnumbered gainers in the ratio of 18:14, while transactions in volume and value terms were mixed, and volume traded declined by 5.12%, as investors exchanged 306.92m shares, compared to previous day’s 324.32m units, driven by trades in UBA, Zenith Bank, FBNH, Guaranty Trust Bank and ETI. Transaction value was up by 2.57% to N3.27bn, from the previous day N3.19bn.

We expect the current trend to continue in the midst of cautious trading, portfolio diversification and profit taking, ahead of the seasonal trends, just as the market awaits inflow of funds from alternative investment and adjustment in CBN policies. Behind this correction lies buy opportunities for discerning traders and investors.

Related Topics:stock analysis
Up Next