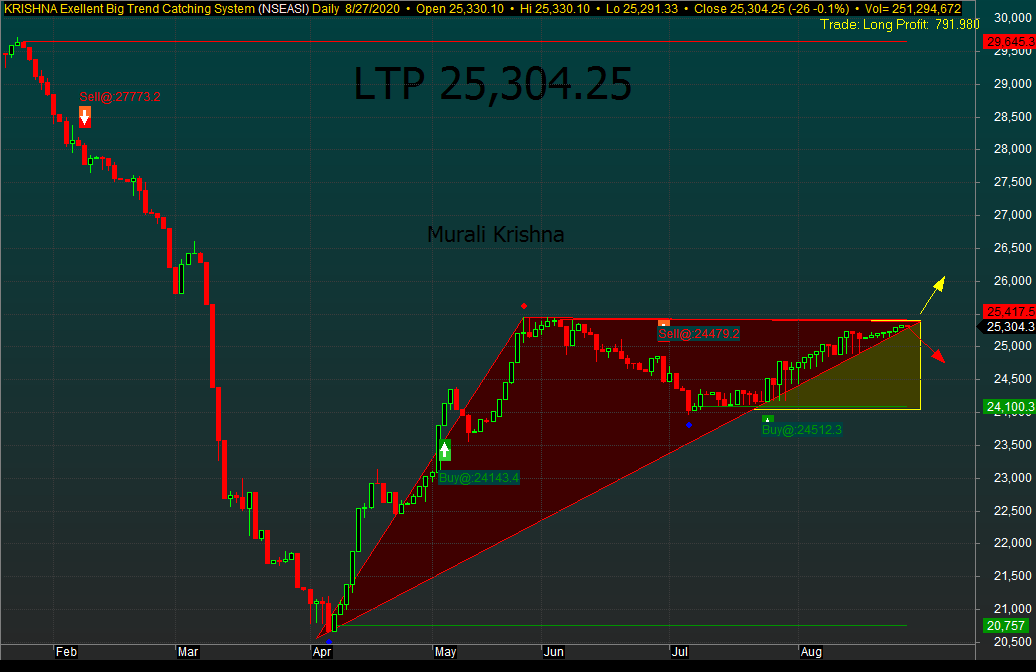 The market slowdown in the midst of month-end window dressing and the lookout for the scorecards, as well as the pullback in oil price are expected; especially with profit booking from the recent rally is underway. Also noteworthy is the fact that portfolio repositioning and rebalancing are ongoing ahead of the 2020Q3 and Q4, given that the NSE index has been in the short-term overbought region, forming a double top chart pattern that supports imminent pullbacks and price corrections.

The fact that mixed sentiment and money flow index are looking down on a very high traded volume is not surprising, after investors took profit from Dangote Cement, Zenith Bank, Access Bank, Ecobank Transnational Incorporated, UBA, Lafarge Africa, and Fidson Healthcare, among others. Investors are still expecting the full-year audited accounts of Redstar Express, University Press and Learn Africa.

Meanwhile, the Q5 result of Guinness Nigeria made available to the market was horribly bad, and indeed reflected the economic situation of the country during the period, specifically th impact of the Coronavirus (COVID-19), particularly on the entertainment industry. Nonetheless, we would not to turn a blind eye to the fact that this company’s performance has been on the downtrend over the past five years.  Revenue and bottom line were down by 21% and 329% respectively resulting in Loss Per Share of N5.74, as against the previous Earnings of N2.50 each.

As the market and economy continued to move in opposite directions, as foreign investors reposition their portfolios on the back of the low price attractions.

Thursday’s trading session opened slightly on the downside and was sustained throughout the day, as the indicators oscillated on repositioning and profit taking in building material and banking stocks. This pushed the NSE’s benchmark index to intraday low of 25,291.33 basis points, from its high of 25,330.10bps after which the market closed below its opening figure at 25,304.25bps.

Market technicals were negative and mixed, as volume traded was higher than the previous session in the midst of negative breadth and mixed sentiment, as revealed by Investdata’s Sentiment Report showing 67% ‘sell’ volume and 33% buy position. Total transaction volume index stood at 1.17points, just as the impetus behind the day’s performance remained relatively strong, with Money Flow Index reading 65.74points, from the previous day’s 72.88points. This is an indication that funds exited some stocks on a profit taking.

Thursday’s downturn was due to selloffs that impacted mildly on the index’s as Year-To-Date loss increased to 5.73%, while market capitalization YTD gain stood at N242.61bn, or 1.78% above the year’s opening value.

Performance indexes across sectors were mixed, except for the NSE Industrial Goods and Banking indices that closed 0.37% and 0.33% lower respectively, while the NSE Insurance index gained 0.54%, followed by NSE Consumer Goods with 0.52% up.

Market breadth turned negative as decliners outnumbered advancers in the ratio of 19:11, while activities in terms of volume and value were up by 39.04% and 16.53% respectively, as investors exchanged 251.3m shares worth N1.58bn from the previous day 180.78m units valued at N1.36bn. The day’s volume was driven by trades in UACN, UBA, FBNH, Access Bank and Transcorp.

The best performing stocks during the session were May & Baker and University Press, as they gained 9.89% and 9.40% respectively to close at N3.00 and N1.63 per share on improved earnings/positive sentiment for the industry and full year earnings expectation respectively. On the flip side, Consolidated Hallmark Insurance and Fidson Healthcare lost 8.11% and 7.25% respectively, closing at N0.34 and N3.71 respectively purely on profit taking.

We expect the current trend to continue on profit taking and portfolio adjustment ahead of the interim dividends from Stanbic IBTC, GTB, Zenith Bank, Access Bank and UBA that have kept the market above the 50-day moving average on a daily time frame. The mixed intraday movement is likely to persist as the month of August gradually winds down in the midst of window dressing, profit booking and investors repositioning their portfolios ahead of Q3 numbers. This is also against the backdrop of the fact that the capital wave in the financial market may persist in the midst of relatively low-interest rates in the money market, high inflation, negative Q2 GDP of 6.1% and unstable economic outlook for 2020 as government and its economic managers are going front and back with mismatch polices and action.

Also, investors and traders are positioning in anticipation of interim dividend paying companies earnings reports, amidst the changing sentiments in the hope of improved liquidity and positive economic indices which may reverse the current trend.

We see investors focusing on portfolio adjustment and rebalancing by targeting companies with strong potentials to grow their dividend on the strength of their earnings capacity.