Half a year after launching the Galaxy Tab S6 5G, Samsung is preparing a new batch of flagship tablets, which will likely be unveiled at the August 5th Unpacked event alongside the Note20 duo.

There’s a good reason to share the event as the new Tab S slates will feature enhanced S Pen support with the same upgrades as the Note phones.

There will be two models, the Galaxy Tab S7 and S7+, which will use different screens, both of which will be larger than the 10.5” panel on the S6.

These will be Samsung’s first tablets with a high refresh rate screen, 120 Hz specifically.

The two will have the same 9 ms latency to S Pen input as the Note20 Ultra. The fast response will allegedly make it feel like you’re writing on paper.

The decorative strip stretching out from the cameras on the back will be the magnetic attachment point for the stylus.

Both tablets will be powered by the Snapdragon 865+ chipset (the first tablets to use the new chip).

It will be paired with high speed LPDDR5X RAM, starting at 6GB, plus 128GB storage. The 5G versions of the tablets will have 256GB storage, likely more RAM too (there will also be a microSD card slot).

Both will support 45W fast charging via the USB-C port, however, you’ll have to supply your own as the tablets are expected to come with only a 15W charger in the box.

Their metal bodies will be painted in Mystic Bronze, Mystic Silver and Mystic Black.

The tablets will have dual cameras on their backs – a wide cam with a 13MP sensor capable of 4K video recording at 30fps and a 5MP ultra wide-angle cam, plus an LED flash. The third and final camera on the tablets will be the 8 MP selfie cam.

The goal is to have the Galaxy Tab S7 and S7+ compete with the iPad Pro and Surface.

To that end, Samsung will release a keyboard add-on with a large track pad for use in DeX mode. 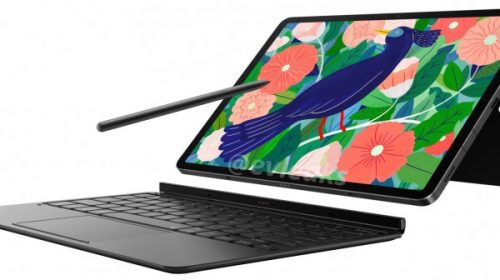 For productivity, the tablets will come with an upgraded Samsung Notes app and deep integration with Microsoft’s OneNote and Outlook.

The two Galaxy Tab S7 tablets will be great for multimedia consumption as they feature four AKG speakers on the side with Dolby Atmos support.

There’s no information about the prices and release dates for the new Tab S7 slates just yet.