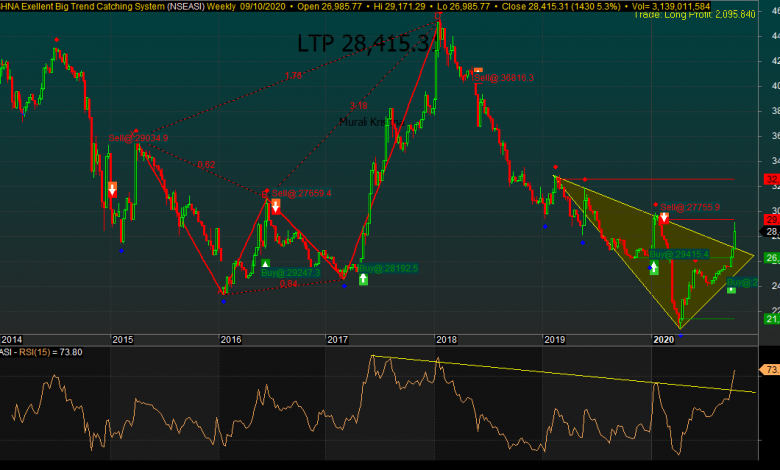 The nation’s stock market opened the week marginally down, as the benchmark All-Share index continued its bearish trend for the fourth consecutive trading session due to lingering profit taking and price corrections. This is, however, happening in the midst of, and despite rising inflow of funds to the equity space even as the Q3 earnings season has kicked off last week.

The expected corporate earnings and September inflation report are likely to further push prices up or down, depending on the numbers that will be released, especially as this quarter’s results will greatly reflect the effects of the coronavirus pandemic and fall in interest rates.

The earnings performance will therefore give investors and analysts a hint into the possible final dividend payout at the end of the last quarter we all care most about. Simply put, the level and possibility of dividend cut would be revealed by the Q3 earnings, even as we admit that the half-year earnings were not as bad as previously envisaged overall, even as we cannot rule out the effects of the various measures employed by the fiscal and monetary authorities to check the situation. If the trend is maintained at this point, equity prices will soar higher and breakout the January highs, as many stocks recently tested that level, before the pullback.

As we have always advised, take position before the earnings start hitting the market, having determined your target exit price and stop-loss with the help of technical analysis. Also, you should understand the momentum and actions associated with earnings season. This is another opportunity to cash in, especially for those who have watched and studied the session on the video on “mastering earnings season for profitable trading and investing in any market situation,” at our last traders and investors summit.

Meanwhile, Monday’s trading opened on the upside, before pulling back as a result of profit taking in medium and high cap stocks, which pulled the NSE All-Share index to an intraday low of 28,170.72 basis points from high of 28,440.82bps. The session, thereafter, closed lower than it opened at 28,337.49bps, on a negative breadth.

Market technicals during the day were weak and mixed while volume traded was slightly lower than the previous session in the midst of negative breadth and mixed sentiment, as revealed by Investdata’s Sentiment Report showing 62% ‘sell’ volume and 38% buy position.

The downturn resulted from selloffs in the form of profit taking in BUA Cement, MTNN, Guaranty Trust Bank, Zenith Bank, Flour Mills, International Breweries, PZ Cussons, Mansard Insurance and Wema Bank. This impacted negatively on the index, as Year-To-Date gains, reducing it to 5.59%, while market capitalization YTD gain slowed down to N1.48tr, or 14.34% above the year’s opening value.

All the sectorial performance indexes closed in red, except for the NSE Oil/Gas that gained 1.36%, while the NSE Insurance led the decliners after losing 1.78%, followed by the NSE Consumer goods with 0.91% down. The Industrial goods and Banking indices lost 0.54% and 0.27% respectively during the session.

Market breadth was negative as decliners outpaced advancers in the ratio of 16:13, while activity in volume and value terms were mixed as volume traded fell by 3.90% while investors exchanged 369.18m shares, from the previous 394.14m units, while value rose by 26.33% to N4.06bn from Friday’s N4bn. Volume was boosted by trades in UBA, Guaranty Trust Bank, Zenith Bank, FBNH and Transcorp.

We expect this volatility and profit taking to slowdown, as candlestick formation at the end of Friday trading supports a reversal, ahead of Q3 corporate earnings season and healthy inflow of funds due to prevailing low rates in money market. We also project inflation would continue its upward movement, with the rate in September projected to be in the region of 13.32%, thereby worsening the negative returns in many investment windows.

The mixed intraday movement is likely to persist this October in the midst of an expected earnings, profit booking, as well as the mismatch in economic policies and negative macroeconomic indices. This is also against the backdrop of the fact that the capital wave in the financial market may persist in the midst of relatively low-interest rates in the money market, high inflation, negative Q2 GDP of 6.1% and unstable economic outlook for the rest of 2020 as government and its economic managers are going front and back with mismatch polices and implementation.

We see investors focusing on portfolio adjustment and rebalancing by targeting companies with strong potentials to grow their Q3 earnings and dividend on the strength of their earnings capacity as the year last quarter is at the corner.

Related Topics:NSEStock market
Up Next