The composite index All-Share index of the Nigerian Stock Exchange (NSE) closed above all the moving averages last week, breaking out the latest strong resistance level of 36,000 mark on high buying pressure. There was also positive sentiment for value, growth and highly capitalized stocks with attractive valuation, as investors reposition for year-end seasonal trends and the much expected economic recovery in 2021.

I really like the market movement this week after a slowdown in the previous week due profit taking and selloffs. The index’s action we saw was as projected, revealing that the much awaited Santa Claus rally is here. It offers discerning investors opportunities for capital gains, after crossing the critical 35,815.46 and 36,000 psychological levels on low traded volume to signal bullish trend as the 2020 fiscal year winds down steadily.

The bull-run for the five consecutive sessions shows that smart money is still in the market, judging by the technical indicators that suggest that a new uptrend is underway. However, investors should not forget that profit taking and price correction are integral parts of equity market dynamics, and inevitable.

The ongoing Santa Claus rally is attributed to window dressing for year-end among institutional investors, even as bonuses are entering the market ahead of the New Year, as some investors are taking advantage of the tax code by selling positions they have taken losses at the end of December to buy-back in January.

The positive momentum across sectorial indexes also supports the rekindled buying interests and expectations, as the market reacted to the low rates regime in the money market, in the face of the continued spike in the nation’s Consumer Price Index for the month of November. Recall that year-on-year inflation rate attained its highest level since August 2019 at 14.89%, from its October 2020 level of 14.23%.

Although, the inflationary trend remains a source of serious concern across the country, the equity market has so far provided a safe haven, with the NSEASI returning 37.12% YTD, remaining the only investment window that has outperformed inflation as of close of trading on Friday. The news of the Federal Government ordering the reopening of the nation’s borders is expected to add more momentum to factors driving the equity prices, going forward. Such factors, including the high liquidity in the system, low yields environment in the fixed income market, uptrend in oil price, the discovery of a vaccine for Covid-19, and the expected early passage of the 2021 budget have supported the positive sentiment in the market so far.

It was a bullish week as stocks hit new 52-week high, reversing previous week’s negative trend, as the market opened on a positive note which was sustained all through the week in review, just as the index action resisted further decline on bargain hunting and buying sentiment that halted the bearish trend on Monday when the benchmark index closed 1.73% up. The positive trend was sustained on Tuesday, when it chalked a further 1.10%, followed by midweek’s 0.76% gain. It thereafter broke out the 36,000 level on Thursday, when it recorded 2.10% gain that ushered in the new uptrend on high traded volume that was extended to Friday when the NSE gained 1.56% on buying position in Dangote Cement and MTNN.

Specifically, the All Share index garnered a total of 2,554.01 basis points, closing at 36,804.75bps, after opening the week at 34,250.74bps, touching an intra-week high of 36.808.29bps, from its lows of 34,206.481bps. This was attributed to high buying pressure as players repositioned for year-end seasonal trends and expectation, in the midst of seeming improvements in the nation’s macroeconomic indices. Also, the NSE’s market capitalization rose by N1.33tr during he week, closing at N19.24tr, from the previous weekend’s N17.9tr, representing a 7.46% gain.

During the week in review, PZ Cussons filed its impressive half-year unaudited result, showing a return to profit, as against the loss reported in the corresponding period of last year, translating into Earnings Per Share of 21 kobo., The period also saw the share prices of AXA Mansard Insurance and NEM Insurance were adjusted for bonus share of 17 new share for 7 held and 10 new shares for 9 held respectively

The week’s advancers’ table reflected the renewed buying momentum witnessed during the week, as the trading pattern changed, ushering in the Santa Claus rally, just as breadth turned positive to reveal price appreciation and uptrend. In all, advancers outnumbered decliners in the ratio of 52:17 on increased demand andpositive momentum as Money Flow Index reads 84.93bps, against 84.31 points in the previous week. 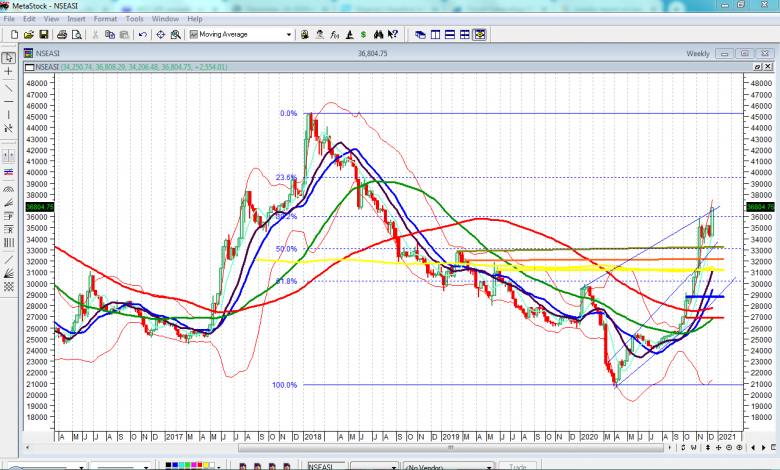 The benchmark index’s action retraced up during the week on a positive sentiment, while smart money accumulates position ahead of the 2020 financials release in the New Year. The index is trading above the 50 and 200-day, as well as the seven-day moving average to breakout the bullish channel on a less than average traded volume and high buying pressure. This is likely to continue as more stocks join the rally in the new week.

Nevertheless, it is expected that market correction can occur at any time especially, as the new uptrend is set to breakout the 37,000bps and the 38,486.26bps level, as well as the 38.2% Fibonacci retracement lines to support the recovery move.

The market’s recovery moves and bullish trend remain strong as factors for the market continue to increase and propel positive momentum. The strong resistance level to watch out for is the 39,000 region, a breakout of which will attract more funds for breakout traders.

However, we envisage a positive outlook while not ruling out profit booking at any moment, after five straight days of rally. Also, the impact of the border reopening, expected COVID-19 vaccine importation, high liquidity, and extension of the 2020 capital budget implementation. There is also the impact of oil prices trading above $50 per barrel, from its March 2020 low, given strong Money Flow Index, as MACD remains in the bullish zone on a weekly chart. ‘Buy’ volume for the period stood at 100%, with total transaction index at 1.22.

The week’s performance indexes across sectors closed green, led by the NSE Insurance, which gained 13.39%, followed by Industrial Goods, Banking, Consumer goods and Oil/Gas, which closed 7.74%, 5.12%, 3.08% and 1.34% higher respectively.

The general market outlook remains strong and mixed in the short-term; following which investors should take short and medium-term positions, while diversifying their portfolio along long-term trades to protect capital. This, they can do, by considering sectors with high upside potentials on the strength of earnings and policy influence. The recent market rally calls for value investing as numbers from some companies and sectors were expectedly mixed, given the negative impact of the COVID-19 pandemic and the arson that followed the #EndSARS protests on full-year results, as revealed by the macroeconomic indices.

Activities in volume and value terms were down by 17.26% and 21.15% respectively as investors exchanged 1.87bn shares worth N16.56bn, from the previous week’s 2.26bn units valued at N20.99bn. Volume was driven by trades in the Financial Services, Consumer Goods and Conglomerates sectors, particularly stocks like Jaiz Bank, UBA, Zenith Bank, FBNH and Transcorp.

FTN Cocoa and Airtel Africa were the best performing stocks for the week, as they gained 40.91% and 21% respectively, closing at N0.62 and N774.40 each on market sentiments. On the other hand, Mansard Insurance and NEM Insurance lost 60% and 47.23% respectively, at N0.92and N1.24 per share on share price adjustment for bonus issues.

We expected a mixed week, as players continue to interpret the recent improved activities in money and fixed income space, also the expected economic data, coupled with the ongoing portfolio repositioning ahead of the Santa Claus, seasonal expectorations and year end window dressing.  We recommended investors to stay in stocks as the vaccine led rally in global markets and inflow of funds into equity space in emerging markets due to prevailing low interest will support equity assets.

Meanwhile, given the market correction which is evitable, being a regular behavior of stock markets after witnessing a rally. The pullbacks at this phase of market recovery will support the upside potentials. This is especially as many fundamentally sound stocks remain underpriced, while the dividend yields of major blue-chips continue to look attractive, despite the recent TB rates hike.

Related Topics:NSEPositive Investor Sentiment
Up Next