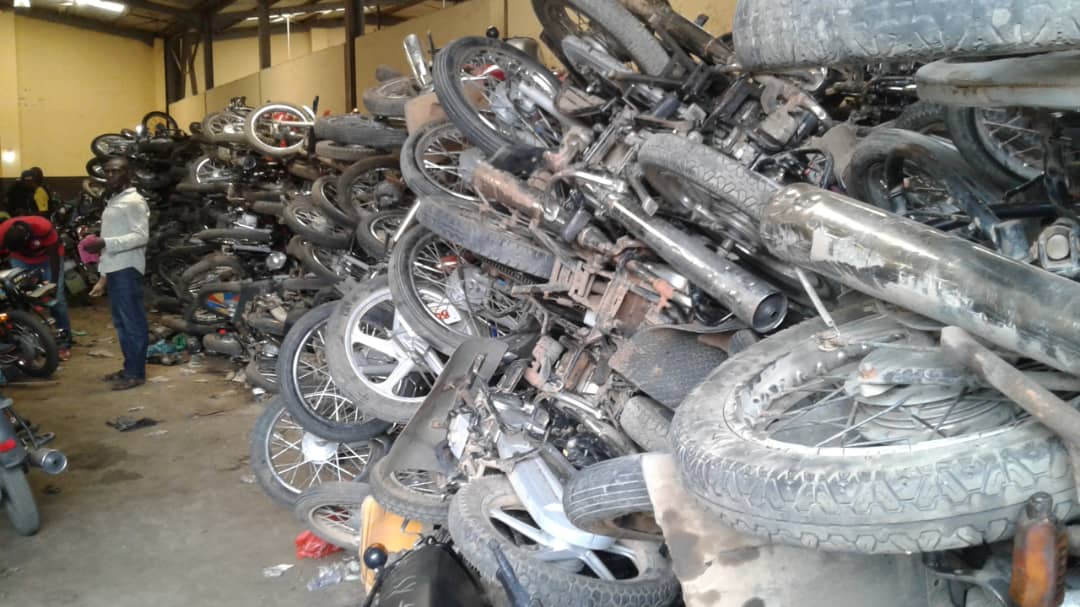 Putting the market price of a new motorcycle at N385,000 and that of a fairly-used one good enough to serve commercial purpose in Lagos at N120,000, Business Metrics estimated that the average price of each motorcycle hovers around N252,000 which then puts the aggregate value of the crushed 2,230 motorcycles at circa N563 million.

The crushing exercise which took place in the presence of the media at Task Force Ground, Alausa Ikeja, was witnessed by the state Commissoner for Information and Strategy, Mr. Gbenga Omotoso and his Transportation counterpart, Dr. Fredric Oladeinde, among other top government functionaries.

Speaking to newsmen after the crushing of the impounded Okada, state Commissioner for Information and Strategy, Gbenga Omotoso, disclosed that over 2,000 motorcycles were billed to be crushed, while about 5,000 had earlier been crushed in the first quarter of the year.

Omotoso also urged the okada riders to embrace the many alternative modes of transportation provided by the government as there were plans to inject more First and Last Mile buses into the metropolis.

According to him: “In the first four months of this year, we had 1,712 accidents, 767 caused by okada, resulting in death, 45 per cent of these riders are youths between 30 and 39 years. So, taking okada off the roads is helping our young ones to stay alive.

“They are very fantastic people who are into entertainment, technology, and no responsible government will watch their blood spilled.

“So, taking okada off our roads is not hurting our people. We are not leaving them to their own devices and so we have said anyone who is interested in doing a decent business can form cooperative and join the First and Last Mile bus scheme.

“Some of them have come up tondo that actually because they know okada is not in the transportation plan of Lagos State.

“They can present their proposals to the state’s employment trust fund and get money to fund their businesses, we have vocational centers where they can learn a trade and start a new life. So, anyone saying okada is the only way to earn a living in Lagos is not doing any good.”

In his address, Oladeinde noted that tricycles are also not part of the state’s strategic transport master plan, but assured the people that taking them off will be after the government had put in place necessary replacements.

According bro Oladeinde: “Tricycle is also not party of the strategic transport master plan, but we understand the gap we have in our system. So, over time as we develop our rail system, BRT and increase the number of boats on our waters, I think the tricycle would disappear as well.

“But they would however be incorporated into the new systems through cooperatives. That is why there’s a systemic approach to ensuring that while we get rid of one mode, we absorb them into another.

“My message to lagosians is that they should be calm, obey traffic laws and patronise the alternatives provided to okada. We are putting more high-capacity buses on the road, and the government in working to make sure our rail system works fine.”

Chairman of the state taskforce, Chief Superintendent of Police, CSP, Shola Jejeloye, who described the enforcement as “very successful,” said compliance level has reached about 85 per cent since enforcement began on June 1.

According to Jejeloye, “The enforcement did not just come into play on June 1, it came first in February and we have been on it since then.

“But people believe in violating the law, which is not good enough in a cosmopolitan city like Lagos.

“Since we began enforcement on June 1, there has been more than 85 per cent compliance because the number of okada on the road has reduced greatly.

“However, I will urge the riders to continue to stay off the roads because the enforcement will be totally sustained.

“They might believe we will relax after the first week, but I am telling them now that there will be more intense enforcement starting next week. We will visit those areas we could not visit last week.

“There is no going back because it’s government policy and government does not make mockery of its decisions,” he added.

Related Topics:Featuredokada ban
Up Next