Nigeria’s Gross Domestic Product (GDP) has decreased by -6.10% (year-on-year) in real terms in the second quarter of 2020, ending the 3-year trend of low but positive real growth rates recorded since the 2016/17 recession.

in their swift response, analysts at Investdata Consulting limited noted that the figures, contained in the latest GDP report for 2020Q2 released today by the National Bureau of Statistics (NBS), marked the steepest fall since 2004, setting the worst record in 16 years. 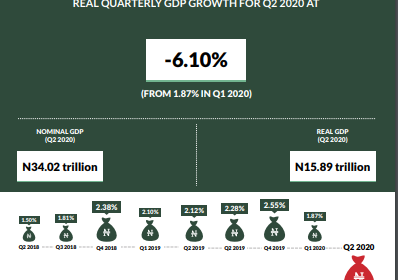 Similarly, the NBS ascribed the decline to the significantly lower levels of both domestic and international economic activity during the quarter, which resulted from nationwide shutdown efforts aimed at containing the COVID-19 pandemic.

The efforts, led by both the Federal and State governments, evolved over the course of the quarter and persisted throughout.

For better clarity, the Nigerian economy has been classified broadly into the oil and non-oil sectors. (Figure 1

In the second quarter of 2020, an average daily oil production of 1.81 million barrels per day (mbpd) was recorded. 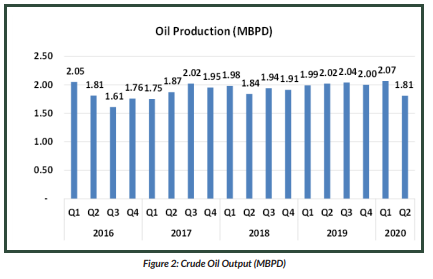 The Oil sector contributed 8.93% to total real GDP in Q2 2020, down from figures recorded in the corresponding period of 2019 and the preceding quarter, where it contributed 8.98% and 9.50% respectively. 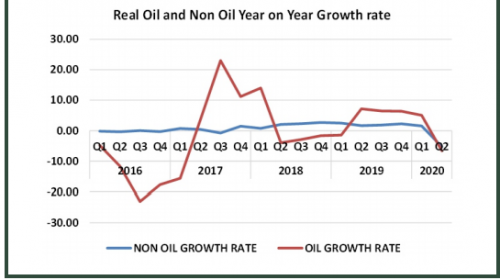 On the other hand, sectors which experienced the highest negative growth included Transport and Storage, Accommodation and Food Services, Construction, Education, Real estate and Trade among others.