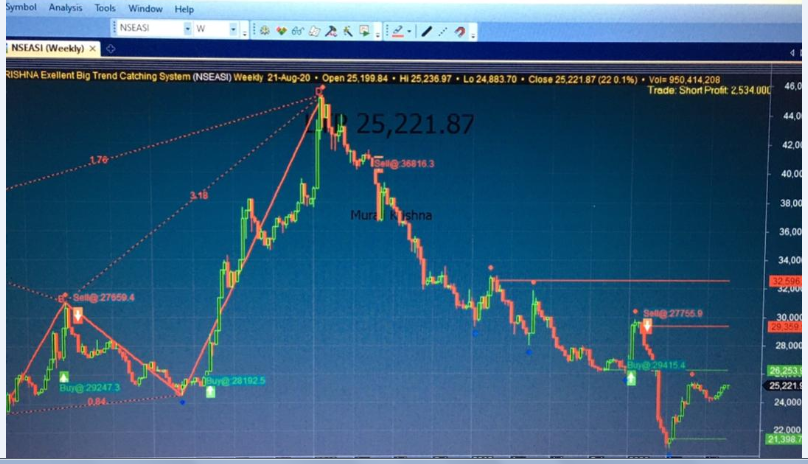 The Nigerian Stock Exchange (NSE) witnessed a weak and mixed bull-run, closing slightly higher last week on a low traded volume, amid caution by investors and investors to avoid being trapped, especially as the corporate earnings reporting season gradually to an end and all eyes are set on the score-cards of interim dividend paying banks results.

Despite the seeming bull transition during the week, profit taking activities hit some sectors and companies as players reduced their exposure or positions ahead of the financials from banks, and increased buying interest in manufacturing stocks which had suffered losses. This was based on their low price attractions and expected impact of the intervention packages by the fiscal and monetary authorities in critical economic sectors to mitigate the effect of the novel Coronavirus outbreak.

So far, the half-year numbers released have really lessened the worst fear among investors, besides giving insights as to what should be expected at the end of Q3 and the year.

The numbers have also supported the ongoing sector rotation and portfolio rebalancing, given that some sectors and companies have shown resilience and potentials to beat market expectation in the midst of challenging economic situation and downturn.

The policy mismatch and lack of coordination among government agencies, is reflecting in the high cost of living and unemployment as revealed by inflation rate at 12.82% in July and the 55.7% combined rate of unemployed and underemployed Nigerians. This has rubbed tar on the government’s well-mouthed plan to lift millions of citizens out of poverty, which has been worsened by the COVID-19 pandemic and the government’s latest hike in the continued hike in the pump price of premium motor spirit.

As if these were not bad enough, there was also the recent Naira devaluation, while unfriendly policies have slowed down foreign exchange inflow, while triggering outflow which has resulted in the current liquidity squeeze in the financial market and the economy in general.

In all of these, investors should prepare and take advantage of the prevailing situation to invest wisely and create more wealth by learning how to earn more through training sessions, seek right information, and have investment goals with good entering and exit strategies in any market cycle. Making money is one thing, keeping it is entirely different, at a time of persistent oscillation in trends. We note that the ongoing pandemic has created opportunities for discerning investors to take advantage of by buying right and selling right, just as cash is king.

The market last week was mixed but up, slowing down the previous week’s gaining momentum as the composite NSE All-Share Index recorded one session of loss and four of marginal gains, due to mixed sentiments and cautious trading, after opening southward at 0.22%. This was halted on Tuesday when the index recorded a marginal gain of 0.02% amidst mixed sentiment, on increased buying interests in banking and consumer goods stocks. This was sustained at midweek, with the benchmark index gaining 0.14%; followed by 0.13% and 0.07% on Thursday and Friday respectively. This followed improved demand for consumer goods, healthcare and banking sector stocks, bringing the week’s cumulative gain to 0.07%, which was lower than the previous week 0.63% positive close.

Consequently, the key performance NSE All-Share index gained 22.03 basis points, opening at 25,199.84bps, touching an intra-week high of 25,236.60bps on a mixed sentiments of profit taking and positioning. This was driven by low price attraction and expectation of first tier banks earnings reports in the midst of negative macroeconomic indices, linked to the pandemic. The NSE’s benchmark index closed the week up at 25,221.87bps, just as, market capitalization rose by N12.22bn, closing at N13.16tr, from N13.15 trillion, which represented 0.09% value gain. The difference by the rise in NSEASI and capitalization in the period under review followed the listing of additional 2.03bn shares of Consolidated Hallmark Insurance, following the successful completion of its recent rights.

Also, during the week, over seven companies presented their quarterly and full year earnings reports to the market. Three months’ scorecards were submitted by directors Flour Mills Nigeria, Northern Nigeria Flourmills, and Lasaco Assurance; while half-year numbers emanated from E-Transact and Champion Brewery. There was also the full-year earnings report for December 31, 2018 from Standard Alliance Insurance.

In that same week, the share price of MTNN, Flourmills and CHI Plc were adjusted for dividend of N3.50, and N1.40, as well as a bonus of one shares for every 15 held respectively.

Low priced stocks and manufacturing companies dominated the top advancers’ table, reflecting the increased buying interests as gainers outnumbered decliners in the ratio of 31:27, while the energy behind the week’s performance was relatively strong, with Money Flow Index reading 67.34bps from prior week’s 66.88ps. These were due to portfolio rebalancing and sectoral rotation.

Technically, the NSE index is at its strong resistant level after forming a double top on the daily and weekly charts that signal a pullback or breakout, depending on market forces in the new week. Meanwhile, next week happens to be the last full trading week for the month of August, and the end of the regulatory period for submission of audited half-year financials by dividend paying banks. This is just as the index continues to trade above its 20-Day Moving Average while almost testing the 50-DMA to breakout, and crossing 50% line of the Fibonacci retracement on low traded volume that betrays the wait-and-see attitude of traders.

Looking at the dwindling gaining momentum of the market ahead of month-end and repositioning of portfolio for Q3 numbers in October, we envisage profits booking when these banks finally release their earnings reports, especially those that had rallied with low yield.

The sectoral performance indexes were largely bullish, except for NSE Oil/Gas and Industrial Goods closing 0.92% and 0.41% lower respectively, while the NSE Insurance index led advancers, gaining 4.40%. It was followed by the NSE Consumer goods and banking that closed 1.88% and 0.81% higher respectively. The current general market mood and economic situation, suggests diversification as investors target sectors with strong potentials to sustain positive earnings and high upside potential for undervalued stocks. At the same time, funds are flowing out of oil marketing and building material companies, therefore the overall outlook remains mixed and bullish in the short-term.

The week’s activities, in terms of volume and value, were down by 26.92% and 27.35% respectively as investors traded 950.41m shares worth N10.12bn, from the previous week’s 1.33bn units valued at N13.93bn. The week’s volume got a boost from trades in financial services, consumer goods and conglomerates stocks, especially Zenith Bank, Guaranty Trust Bank, Transacorp, Nigerian Breweries and International Brewery.

We expect a breakout or pullback at the current resistant level of the market, depending on investors’ reactions to the audited half-year earnings reports from Zenith Bank, Guaranty Trust Bank, Access Bank, UBA, Stanbic IBTC and Fidelity Bank, which are likely to hit the market any moment from now. In the face of mixed sentiments, adjustment of NNFM for 15 kobo dividend and portfolio rebalancing on the strength of half-year reports that beat market expectations, retail and institutional investors are being spurred to look the way of equity assets with high yields.

We cannot also rule out investors pricing in government’s inconsistency, policy mismatch and weak macroeconomic data as labour market report released by NBS which revealed the high level of unemployment in the country, a situation that remains a threat to the economy. Already, the inflation rate has risen above the Central Bank of Nigeria (CBN) benchmark Monetary Policy Rate (MPR) at 12.5%, even as the declining industrial productivity points to the reality of a recession.

The sectoral rotational wave will help investors cash in on low cap stocks and sectors that have suffered huge losses before now. Already investors are looking the way of healthcare, airline service providers, oil marketing stocks, banking among sectors likely to be impacted positively in the much anticipated global and domestic economic recovery.

Also, the possibility of continued funds inflow to low priced stocks is high, due to the higher yields and upside potentials, considering the low rates on offer in the money and bond markets. In the meantime, investors should also look out for developments around the implementation of the CBN’s funding plan for small and medium scale businesses.

Already, we notice that investors are taking position in healthcare and other defensive stocks likely to survive this meltdown, as seen in the increased trading in them, even as the global markets continue on the recovery path, with the gradual easing of the lockdown.

While discerning investors should prepare to take advantage of stocks revaluation to position for the medium to long-term, it is noteworthy that the Nigerian equity market is selling at a discount and therefore offers high upside potential.