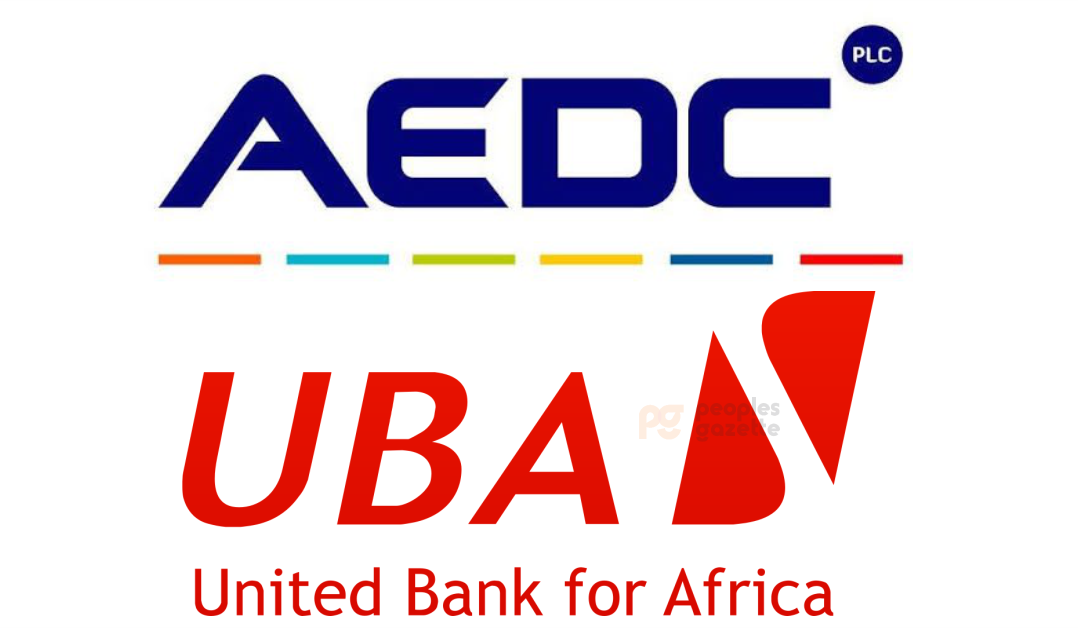 The United Bank for Africa (UBA) took over 60 per cent equity of private investors in Abuja Electricity Distribution Company (AEDC) to recover its acquisition loans from KANN, the core investor.

This was disclosed Wednesday by the Nigerian Electricity Regulatory Commission (NERC) and the Bureau of Public Enterprises (BPE).

In a joint statement, the duo (NERC and BPE) said legal process was followed to suspend the AEDC management and to create the interim management whose members were yet to be announced.

“The action to appoint an interim team to manage AEDC was not done on the basis of a directive from the federal government as being falsely reported in the press but on the basis of legal processes arising from the failure of the core investor in AEDC to meet its obligations to a lender.”

It also said dispute amongst investors of AEDC’s majority shareholder – KANN Utility Company Ltd resulted in dispute with the UBA that provided the acquisition loan during the 2013 privatisation exercise. The debt servicing is said to have not been completed prompting UBA to appoint a Receivership to take over AEDC in a bid to recover its loan.

The statement said during this crisis, AEDC could not meet its operational obligations, forcing its workers under the Nigerian Union of Electricity Employees (NUEE) to go on strike over payment issues on Monday, causing outages in Abuja, Nasarawa, Kogi and Niger States for 14 hours.

It said NERC, Central Bank of Nigeria (CBN) and BPE had on several occasions worked to resolve the issues. Due to the debt issue, the statement said UBA exercised its rights by appointing a Receiver/Manager over KANN while the crisis raged.

UBA’s agent has agreed to the appointment of an interim management team in conjunction with BPE to address business failure events and ensure continuity of service to customers in the service area, it noted.

The Minister of Power, Engr. Abubakar D. Aliyu, on Wednesday, explained that the decision to change the management of AEDC was taken by the company’s shareholders and approved by the federal government as the regulator.

The minister said in a signed statement that the DisCo had been faced with operational challenges arising from a dispute between KANN Consortium, a core investor with 60% equity in AEDC, and UBA which lent the fund for the acquisition of the majority shareholding of the DisCo.

When contacted for further clarification, Isa Sanusi, the spokesman to the Minister of Power, said the president could not have interfered in removing the AEDC management when it is not the core investor as UBA (possessor of KANN stakes) has 60% while the government has 40% stake in the DisCo.

On Tuesday, a statement credited to the Minister of State, Power, Mr Goddy Jedy-Agba, said the AEDC management was sacked through President Muhammadu Buhari’s approval. However, industry experts questioned the power of the president to issue that directive in the privatized power sector.

KANN holds 60 per cent stake in AEDC while the Federal Government of Nigeria (FGN) through BPE holds the balance of 40 per cent, making KANN whose stakes were seized by UBA over outstanding loans, the core investor in AEDC.

Commenting on the power of the president to sack the AEDC management, an energy economist, Prof. Omuwumi Iledare, told the press that the president does not have power to remove AEDC as it is registered under the Company and Allied Matter Act (CAMA).

He said, “I am not sure he is the one who removed AEDC. Of course, he is the Executive President. But AEDC is a CAMA registered liability company and how to dissolve the board is there. Any action contrary to that process has a negative impact on public policy perception index with private investment flow implications.”

He however noted that there is an exception. “Of course, the president can issue an executive order if there is evidence of insecurity looming and usually this is done not unilaterally.”

What the Presidency is Saying

Meanwhile, the Presidency has said President Muhammadu Buhari did not order the sack of the management of AEDC as announced by the Minister of State (Power), Goddy Jedy Agba in a statement on Tuesday.

The Senior Special Assistant to the President on Media and Publicity, Garba Shehu, in a statement, said such insinuation was untrue.

“The Presidency wishes to react to a news item making the rounds, credited to the Minister of State for Power that President Muhammadu Buhari has ordered the sack and replacement of the management of the Abuja Electricity Distribution Company, AEDC.

“This cannot be true. Since the privatization of the Power Sector in 2013, the management of the successor companies has reverted to the new owners.

“It is, therefore, totally out of place and inconceivable that the President would be linked to the management of a private organization, let alone sacking it.