Following release of purchasing manager index (PMI) report on Thursday which revealed heightened inflationary trends in Nigeria for the month of March, analysts have said the trend of spending more to get less is not subsiding any time soon.

Latest data by the National Bureau of Statistics (NBS) showed that, for the 19th consecutive month, inflation rose by 84 basis points to 18.17%, driven principally by acute rises in the prices food items in the country.

Projecting into the near future, analysts at Cordros Capital Limited expect the rate to worsen to 18.75% in April.

They observed that major farmlands across the country remain under cultivation due to the ongoing planting season.

This, in effect, will further stifle supply of food items to continue to fall short of demand in April.

Besides, the analysts opined that farmers would find it difficult to go to their farms for off-season harvests due to the incessant security challenges, particularly in the Northern region.

“We expect the demand/supply imbalance to be further exacerbated by the ongoing Ramadan season due to increased demand for food items,” they said.

That said, the experts in a macro economic report said the slight increase in the month-on-month reading for food inflation in March despite the short-lived blockage of food supplies suggests food prices are now getting defensive.

The most probable explanation for this is that stuttering consumer demand owing to declining real income may have tempered price increases by suppliers, according to them.

“All in, we expect food inflation to print 1.85% m/m in April, with the low base effect from the corresponding period of last year translating to a y/y reading of 23.76%.

“We understand that the Federal Government deferred the subsidy removal for six months to give ample time for broad consultations before reaching a final decision.

“The preceding bodes well for inflation expectations as fuel prices are likely to remain stable at current levels.

“Similarly, we believe the pass-through impact of Naira devaluation is already waning, and we do not see further devaluation in the IEW in the near term, given the stability in oil prices at current levels amid the innovative strategies employed by the CBN in increasing dollar inflows. 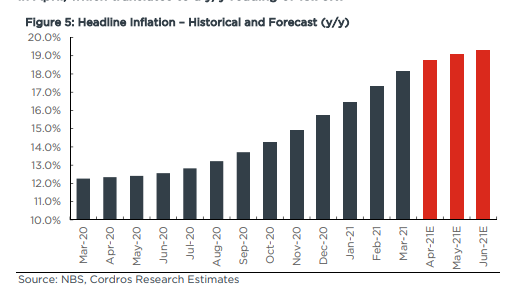