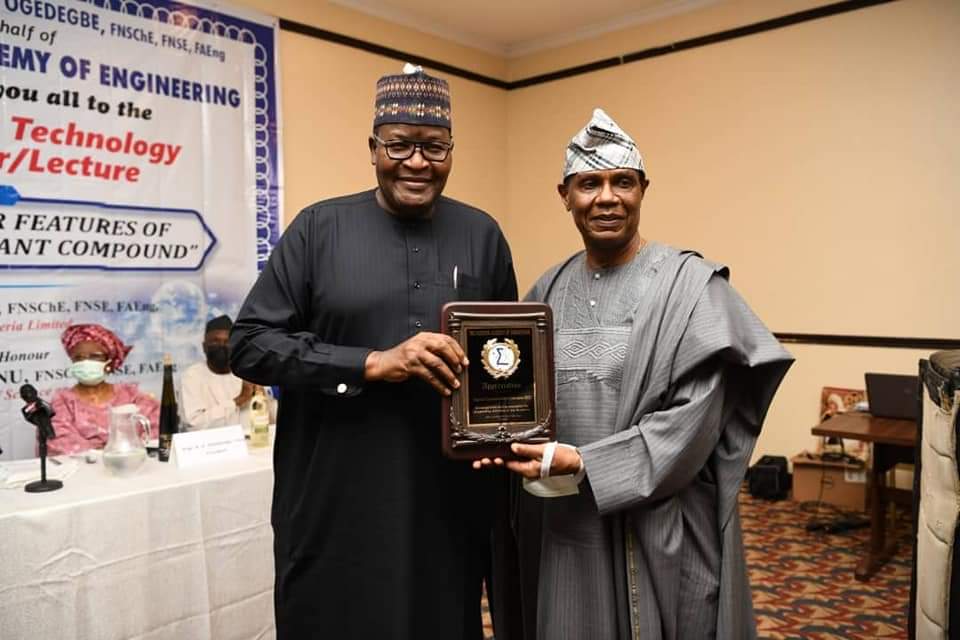 The Nigerian Academy of Engineering (NAE), one of the highest professional bodies in the engineering field in the country, has presented an award to the Nigerian Communications Commission (NCC) in recognition and appreciation of its support of the activities of the academy towards enhancing economic development.

The NAE is a not-for-profit and non-governmental organisation established for the purpose of promoting excellence in technological and engineering training and practice to ensure the technological growth and economic development in Nigeria.

The Executive Vice Chairman of NCC, Prof. Umar Garba Danbatta received the recognition award at the 2021 Academy Technology Dinner/Lecture organised by NAE in Lagos on Wednesday.

The event had the Minister of the Federal Ministry of Science and Technology, Dr. Ogbonnaya Onu, as Special Guest of Honour.

Danbatta is a Fellow of the Academy and has, since becoming the EVC of NCC in 2015, remarkably stepped up NCC’s engagements with the academia and other professional institutions in science and technology towards advancing the socio-economic development of Nigeria.

The EVC, who spoke with the media shortly after receiving the recognition, said NCC is delighted to have been recognised for the modest contribution to the activities of the Academy and to the advancement of the nation’s economic development.

“On behalf of the Board, Management and the entire staff of the Nigerian Communications Commission, I wish to express our appreciation to the Nigerian Academy of Engineering. We see this gesture as an acknowledgement of the little efforts we are making towards the progress of the NAE,” he said.

Danbatta also spoke about the various interventions the Commission has been making through its concerted initiatives such as the Digital Awareness Programme (DAP) for secondary schools and Advanced Digital Appreciation Programme for Tertiary Institutions (ADAPTI) for tertiary education across Nigeria.

President of NAE, Engr. Alex Ogedengbe, further appreciated the Commission for its consistency in supporting the Academy, especially since the coming on board of Prof. Danbatta as the country’s Chief telecoms regulator.

He thanked the NCC Management for supporting the objectives of the NAE, which he said, are “To promote excellence in and the advancement of science, engineering, technology and innovation for the development of the economy and humanity.”

According to him, the NAE also facilitates dissemination and exchange of ideas among members and other similar bodies and establishments.

The event which was attended in strict compliance with COVID-19 safety protocols, had Prof. Sam Adefila, as the Guest Speaker. Prof Adefila spoke on the technical theme of the annual lecture feature of the event: “H20, The Peculiar Features of Earth’s Most Abundant Compound.”

Fellows of the Academy are drawn from a broad spectrum of engineering discipline, occupation and geographical location and include very senior Nigerian and foreign engineering professionals, who have distinguished themselves in professional practice, business, academia and government.