Positive outlook on NGSE, but expect profit booking after 9 sessions of gains 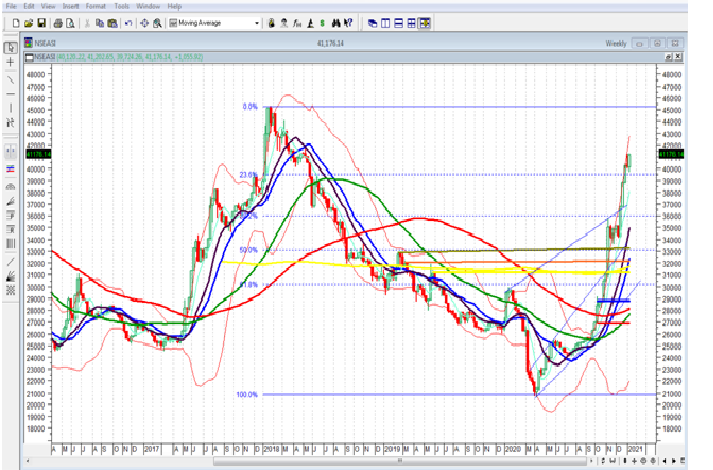 The Nigerian Stock Exchange (NSE) sustained a positive momentum and bullish performance in the second trading week of 2021, which ended on Friday, reversing previous week’s profit booking on the back of a change in trading pattern. This was as bargain hunting continued ahead of the earnings reporting season.

The National Bureau of Statistics (NBS), on Friday published data for December inflation rate, which spiked for the 16th consecutive month, closing at 15.78%, from November’s 14.89%, driven by food inflation. This may not elicit any strange reaction, given that analysts had envisaged the increased based on the usual culprits- general insecurity and its impact on farmers, besides the unending farmers/herders/bandits problems, border closure, recurrent hikes in fuel and electricity price hikes, as well as imported inflation arising from the official and unofficial Naira devaluations, among others.

The week’s volume signaled increased buying interests in medium and low cap stocks in the midst of the New Year portfolio repositioning that pushed the market higher. The insurance sectors topped the weekly performance chart as recapitalization in the sector entered high gear attracting new entrants into the business, with Stanbic IBTC Holdings expanding into the sector where it now seeks approval and license. This move reveals potentials in the sector, but investors should trade with serious caution.

The benchmark NSE All-Share index witnessed a retracement during the week, breaking out the 41,000 psychological line on positive sentiment across sectors, while buying interests in dividend-paying companies, medium and low priced equities boosted market breath. This was just as the week’s transaction volume revealed new positioning in sectors that lagged behind before now.

In equity investment and trading, taking profit is as important as positioning in sound fundamentally stocks. After all, you only make money when you actually close the position and take money off the table.

Notwithstanding the current trend, Investdata believes that the market still has some inherent value that can be extracted by those investors who know where to look. We note that during the out-gone year, analysts and investors focused mainly on valuation, even as equity repeatedly made new highs, with questions centered on overvalued stocks and the market’s overbought region. At this time, the market is heading to breakout the 2017 highs ahead of earnings expectation.

History shows that the nation’s stock market has been driven and supported by two major factors: the low interest rate regime, and oscillating crude oil price in the international market as it sells above pre-coronavirus and benchmark price for 2020/2021 budget. We know that rates are determined by the monetary policy authority, while oil price is a function of demand and supply depending on OPEC regulations.

These low interest rates and restrictions imposed on financial institutions and others have resulted in the crash in money market rates, driving yields lower in the fixed income market.

So, if you are a trader or investor willing to zig while others are sagging in the new year, now might be the right time to look at adding some of the 10 golden stocks for 2021 to your portfolio, ready for whatever the new normal will bring in the new year.

Putting it mildly, 2020 was truly a mixed and challenging year for many market players. it was a tale of two markets, even as those who were able to stick to their investment plan following investdata’s buy and sell signal and ignoring market volatility, fared relatively better during the period.

In less than 30 trading sessions after the Invest 2021 summit titled: “New Opportunities & New Paths To Profit,” six of Investdata’s 10 Golden Stocks for 2021 have achieved their targets already, giving more than the yield for the 3.7% of the 364-dayTreasury Bills at the last auction, besides also outpacing inflation rate. This is how investors can hedge against inflation through investment in equities that deliver value and high return. This is an indication that participants at our INVEST 2021 SUMMIT held on December 5,2020, are already in profit and sliming to their bank.

We note that some sectors and stocks have higher upside potentials with attractive yields, following which investors should target December year-end companies, dividend paying stocks with high payout potentials and prospects of making strong sales or revenue growth in 2021.

The NSE was bullish throughout the five trading sessions of last week, while maintaining a positive market breadth, in addition to increased demand for kobo stocks that revealed some recovery.

The composite NSEASI opened the week on the upside on Monday, gaining a marginal 0.08%, due to rekindled bargain hunting and buying sentiments that was sustained throughout the rest of the period. On Tuesday, the index rose 0.36%, followed by midweek’s 0.11% notch which was extended to Thursday and Friday when it recorded 1.54% and 0.50% respectively. These brought the week’s total gain to 2.63%, more than enough to overwrite previous week’s 0.37% loss on a very high traded volume and positive breadth.

The week’s advancers’ table was dominated by low cap stocks, reflecting the positive buying sentiments as the trading pattern supports a recovery of the nation’s economy from recession. Breadth was positive during the week, revealing the higher prices and uptrend among medium and low priced stocks. During the period, advancers outpaced declinersin the ratio of 60:19 on a buying sentiment and positive momentum as Money Flow Index read 86.88bps, as against 86.03 points in the previous week. In the period under review also, Challrams released its belated 2020 first and second quarter results, just as news of acquisition news from Ardova and Transcorp hit the market, with more quoted companies notifying the exchange of their closed periods for their audited 2020 financials and board meeting.

The NSE index action was bullish and volatile during the week on positive sentiments, while discerning investors accumulate position among the dividend paying stocks ahead of the 2020 earnings season from February. The NSE index is trading above the 50 and 200-day Moving Average, as well as the seven-day moving average to breakout new resistance levels on a high traded volume and buying pressure. This is likely to continue as more stocks joined the rally in the second trading week of the year.

The market’s recovery moves and bull-trend remain strong factors for the market’s continued increase, propelled by the positive momentum. The strong resistance level to watch out for at this time is the 41, 212.40bps to 41,642.15bps region, even as crude oil price is oscillating to  above $52 per barrel in the international market, while government has earmarked N424m for import of the Coronavirus vaccine in Q1  2021.

However, we envisage a positive outlook while not ruling out profit booking at any moment, after nine straight days of rally. Also, the positive outlook is not out of place, given the expected impact of the border reopening, expected COVID-19 vaccine importation, high liquidity, and extension of the 2020 capital budget implementation. There is also the impact of oil prices increase from the March 2020 low, given the strong Money Flow Index, as MACD remains in the bullish zone on a weekly chart. ‘Buy’ volume for the period stood at 44% and sell position at 55% with total transaction index at 0.78.

The week’s performance indexes across sectors were bullish, as the NSE Insurance led the advancers after gaining 17.48%, followed by Oil/gas, Consumer, Industrial goods and Banking that closed 7.25%, 3.11%, 2.84% and 2.53% higher respectively.

The general market outlook remains strong and mixed in the short-term; following which investors should take short and medium-term positions, while diversifying their portfolio along long-term trades to protect capital. This, they can do, by considering sectors with high upside potentials on the strength of earnings and policy influence. The recent market rally calls for value investing as numbers from some companies and sectors were expectedly mixed, given the negative impact of the COVID-19 pandemic and the arson that followed the #EndSARSprotests on full-year results, as revealed by the macroeconomic indices.

Transactions in volume and value terms were up by 1.77% and 64.72% respectively, as investors exchanged 3.45bn shares worth N32.73bn, as against the previous week’s 3.39bn units valued at N19.87bn. Volume was driven by trades in the Financial services, Construction/Real Estate and Conglomerates sectors, particularly UPDC REIT, Mutual Benefits Transcorp, Access Bank and Zenith Bank.

Japaul Gold and Mutual Benefits Assurance were the best performing stocks which gained 56.70% and 50% respectively at N1.52 and N0.42 each on market sentiments. On the other hand, Cutix and Daar Communication lost 12.92% and 10% respectively, closing at N2.09 and N0.21 per share on market forces.

We expect the mixed performance on profit taking and buying interests in undervalued and dividend-paying stocks ahead of the market’s major earnings reporting season, especially as low interest rates and oil price oscillation have so far supported the Nigerian economy and equity market. There is also the likelihood of reversal of trend and continuation, as investors position in high yields stocks in the New Year. Equally important is the fact that technical indicators reveal overbought on the weekly and daily chart, while the RSI reads 70 points and above, a situation that supports the likelihood of another correction.

There is also the expected economic data, as well as the ongoing portfolio repositioning ahead of the 2020 full-year earnings reporting season in Q1 of 2021.