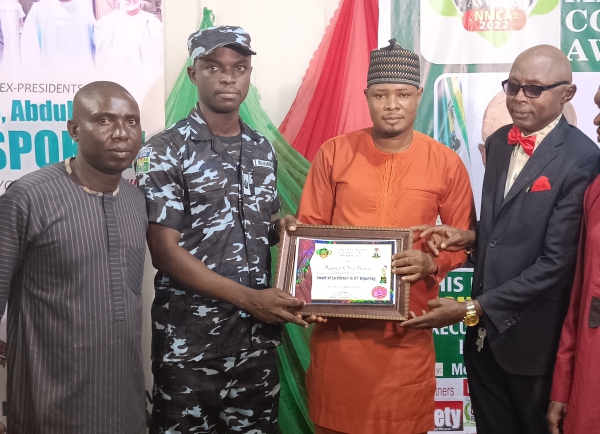 Business Metrics Publisher and Editor, Omobayo Azeez emerged among other personalities who shined at the just concluded National Media Community Award (NMCA) at the weekend where he clinched Award of Excellence in ICT Reporting.

Other awardees include Chiemele of ThisDay Newspaper, Dayo Asaju of First Weekly Magazine, Mike Osemeke of SuperScreen TV, Christopher Orji of The Sun Newspaper, and Mennor Maureen Nwaezeigwe of TV Africa, among others.

Apart from media personalities, other individuals recognized at the event that held at the Nigeria Institute of Journalism (NIJ) included the Lagos State Commissioner of Police, Abiodun Alabi; Police Public Relations Officers, Lagos State Command, SP Benjamin Hundeyin; the presidential candidate of the Accord Party, Professor Christoper Imumolen, among others.

While presenting his award, the organisers said Azeez has been recognised for his contributions to the telecoms and ICT Sector in the country as a journalist and as the Convener of Policy Implementation Assisted Forum (PIAFo) where some telecoms policies have been dissected.

Receiving the award, Azeez appreciated the organizers of the National Media Community Awards for recognizing his efforts towards the development of the ICT Sector as both an economic enabler and driver of social well-being.

He said: “I am delighted to receive this award which I am dedicating as a token of appreciation to Business Metrics team and everyone who believes in our vision and not so conventional initiatives targeted at adding value to the ICT and telecoms sector and the economy at large.”

The National Media Community annual awards is a great platform which promotes media excellence and ensures that media professionals not only go around celebrating others but are also celebrated in recognition of their outstanding performances.