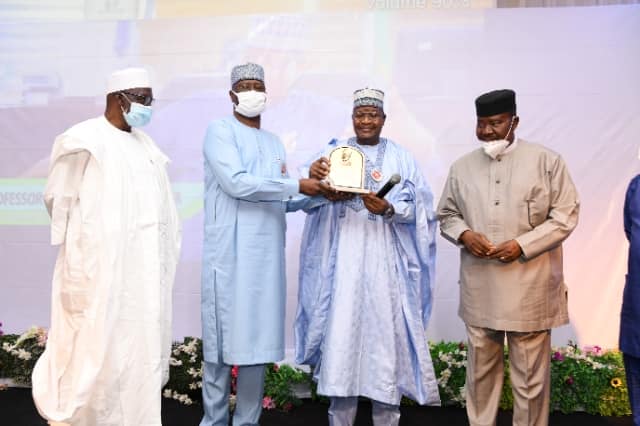 Umar Danbatta, the executive vice chairman of the Nigerian Communications Commission (NCC), at the weekend, dedicated his Zik Prize to the board, management and staff of the Commission for their “collective and untiring commitment and efforts” in advancing the course of effective telecoms regulation in the country.

While receiving the award in the professional leadership category at the annual Zik Prize 2020 organised by Public Policy Research and Analysis Centre (PPRAC) in Lagos on Sunday, Danbatta thanked the organizers for the honour, stating that the award was “a recognition for the entire Commission.”

“It is gratifying that our modest efforts at the Commission, especially since the coming on board of our leadership in 2015, are being recognized by the organisers of this prestigious award.

“I convey my profound gratitude to the organisers for counting me worthy of this award and we accept this gesture as a challenge for to do more in digitally advancing our economy,” Danbatta responded after receiving the award.

The award was attended by NCC board members, senior management and other staff of the Commission; aside other awardees in different categories as well as dignitaries from across the country.

According to the citation, Danbatta was described as “a brilliant engineer, astute administrator, philanthropist and an outstanding nation builder who has brought his wealth of experience and remarkable regulatory finesse to bear as the country’s chief telecoms regulator.”

Within a few years at the helm of affairs, Danbatta has embarked on many regulatory initiatives that have helped in transforming the NCC into a regulator  of global acclaim through diligent implementation of the strategic 8-Point Agenda, which gave much-needed direction to the activities of the Commission. 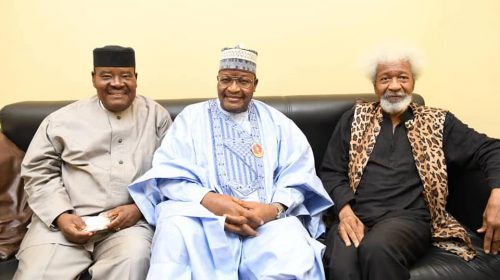 L-R: Chief Mac Nwabara, Advisory Board Member, Zik Prize; Danbatta and Prof. Wole Soyinka, Chairman of the the occasion, at the event.

Also, “through several innovative initiatives, such as Subscriber Identification Module (SIM) registration and 112 Emergency Number, Umar Danbatta has helped in the efforts towards stemming insecurity in the country.

Danbatta was also cited to have led the charge to drive Nigeria’s industrial revolution and knowledge economy, leveraging telecommunications.

It was noted that today, telecommunications contribution to the Gross Domestic Product (GDP) has grown by 70 per cent from 2015 to 2020, while broadband penetration has leaped from 8 per cent to over 45 per cent in the same period.

Danbatta’s leadership was also cited to have enhanced transparency and innovation in the sector and increased the NCC’s recognition as Africa’s foremost telecoms regulator.

Chairman of the occasion, Prof. Wole Soyinka, described the Zik Prize as “one of the most credible and enduring awards that recognises excellence, humanity and service in nation building.”

Other awardees at this year’s annual event include the Secretary to the Government of the Federation (SGF), Boss Mustapha, who won in Public Service category; President of the Senate, Dr. Ahmad Lawan, who won in the political leadership category; Governor of Borno State, Babagana Zulum, his counterparts from Delta State, Senator Ifeanyi Okowa and Oyo State Governor, Engr. Oluseyi Makinde, who won in good governance category.

Others are the Founder/Group Managing Director, Emzor Pharmaceutical Industries Limited, Dr. Stella Okoli, who won in business leadership as well as Group Managing Director/Chief Executive Officer of UBA Plc, Mr. Kennedy Uzoka, who is a joint winner in the professional category with Danbatta.

This year’s award marked the Silver Jubilee anniversary of the prestigious Zik Prize award, which was instituted by some eminent Nigerians, including Professor Anya O. Anya, Late General Domkat Bali (Rtd) in 1995 to memorialize and extol the legacies of the first President of Nigeria, Dr. Nnamdi Azikiwe.

Related Topics:DanbattaZik Prize
Up Next