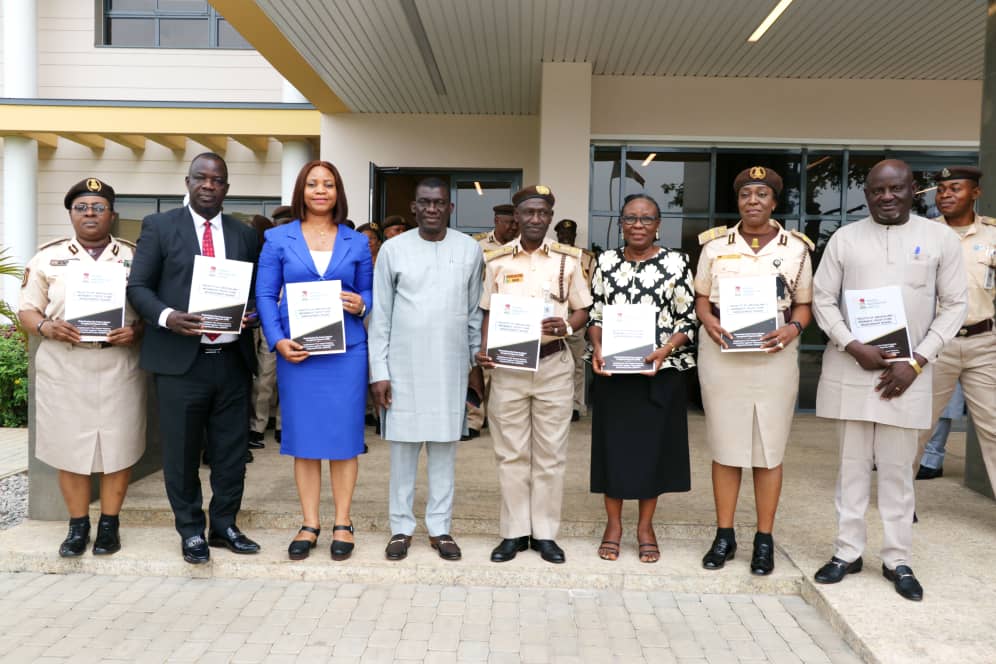 Caption: The Comptroller General of Nigeria Immigration Service, Isah Idris, and other members of the management board of Objects of Smuggling of Migrants Trust Fund shortly after the board’s inauguration during the week.

The Nigeria Immigration Service (NIS) has inaugurated the management board of the Objects of Smuggling of Migrants Trust Fund.

The new development, according to a statement by the NIS Public Relations Officer, Amos Okpu, is aimed at combating frontally the menace of smuggling of migrants by traffickers through proper management of the proceeds of the crime.

Mr Okpu said the agency derives the power to inaugurate the management board from Section 97 of the Immigration Act, 2015.

He said the law “provides for the establishment of the Objects of Smuggling of Migrants Trust Fund into which all proceeds of the sale of assets and properties of migrants’ smugglers shall be paid.”

The statement added that the law also provides that the management board of the trust fund shall comprise representatives from the NIS, ministries of interior, health, finance, and women affairs and social development.

Representing the Interior Ministry on the board is a Deputy Director in charge of Immigration, Atinuke Ajiboye, while Benjamin Okwesa, Deputy Director, represents the Ministry of Women Affairs and Social Development.

Meanwhile, the statement has said the inauguration of the board represents a significant milestone in the agency’s determination to “not only combat persons engaged in migrant smuggling but also ensure that victims rescued from migrants’ smugglers are rehabilitated to continue with their lives.”

Speaking shortly after inaugurating the board, the Minister of Interior, Rauf Aregbesola, who was represented by a Director in the ministry, Peter Obodo, hailed the development and called on members to get down to work to frontally combat what he described as the disturbing activities of smugglers of migrants.

He noted that henceforth, migrants’ smugglers would no longer have it as business as usual.

Earlier in his speech, the chairman of the board and Comptroller General of Immigration, Mr Idris, said; “The activities of migrants’ smugglers have assumed unacceptable proportions and therefore every necessary effort should be put in place to checkmate them.

“The event we are having today is one of such efforts we consider important to make a strong statement about our readiness to give migrants smugglers a good fight”.

Mr Idris reiterated that the task of the board is tough and enormous, saying it would require huge investment of time, courage and experiences by members to make good successes in the fight against migrant smuggling.