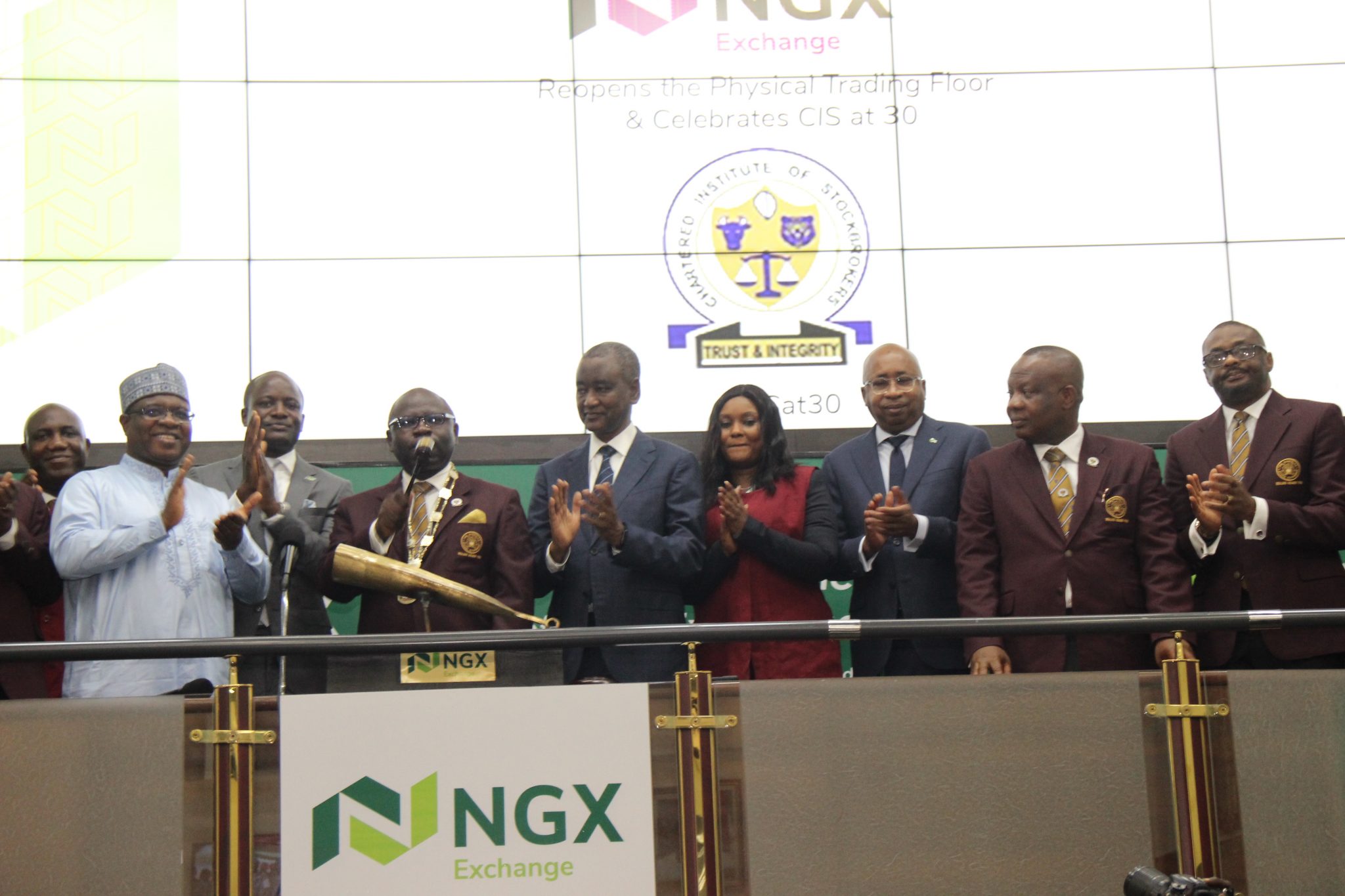 Nigerian Exchange Limited (NGX) hosted the Chartered Institute of Stockbrokers (CIS) to a Closing Gong ceremony to commemorate the Institute’s 30th anniversary alongside the reopening of the trading floor of the market on Monday.

The Chairman, NGX, Abubakar Mahmoud, SAN, OON, whilst giving his remarks congratulated the Institute for its contribution to upholding integrity and ethics in the capital market while promoting and protecting the interests of the stockbroking community.

He also thanked stockbrokers for their cooperation with NGX, attributing the successful record of trading with zero downtime to a combination of NGX’s investment drive in technology and the collective agility and collaboration between the Exchange and the stockbroking community.

He said, “Thirty years of excellence is no small feat and at the Exchange, we recognise the significance of CIS to the capital market as it engenders commitment to the highest standards of service and professionalism. Its advocacy initiatives and support for the stockbroking and investment practice in Nigeria is notable and worthy of celebration.

“Moving forward as the Exchange, we plan to leverage our shared history and cordial relationship with CIS to further drive growth and value creation in the capital market. NGX wishes the Institute many more years of excellence as it continues to markedly enhance the Nigerian capital market and the broader economy.”

The Chairman, NGX Group, Alhaji Umar Kwairanga during his remarks noted that it was to the credit of NGX, NGX Regulation, Central Securities Clearing System (CSCS), NGX Group and the stockbroking community that trading flowed seamlessly during the forced closure period. He however said, “I also know how physical interactions matter to us brokers and will continue to make sure that we see the impact of us coming back to the trading floor.

“We are also marking this alongside the ceremony commemorating our 30th anniversary and I hope that this is just the beginning of greater collaboration between brokers, NGX Group as a whole and the capital market,” he added.

Complementing the Chairmens’ comments, the Chief Executive Officer, NGX, Mr Temi Popoola said, “NGX will continue to support the initiatives of the institute and cooperate for the further advancement of the capital market.”

The President and Chairman of the Governing Council of CIS, Mr Oluwole Adeosun underscored the longstanding relationship between CIS and the Exchange. He promised that the Institute would continue to cooperate with NGX Group in its new structure. “A lot has been achieved from the initial foundation built by NGX for CIS. For 32 months, we have been trading seamlessly remotely due to the investments NGX made. We the operators express gratitude to the Exchange and believe we are definitely poised to achieve more together onward.”

Related Topics:CISNGXNGX trading floor
Up Next