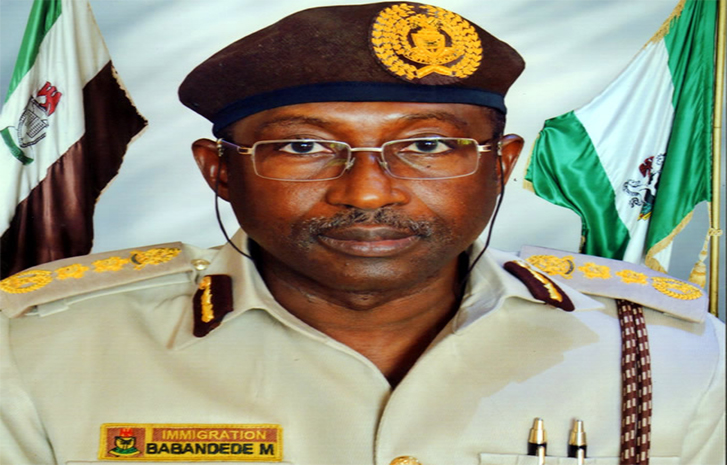 The government of Spain has awarded the immediate past comptroller general of Nigerian Immigration Service (NIS), Muhammad Babandede, with the honour of the Officer of the Civil Merit of Spain (OCMS).

Babandede has merited the recognition for his contributions to global fight against illegal migration and trafficking in persons which began with his years at the National Agency for the Prohibition of Trafficking in Persons (NAPTIP) and later at the Nigeria Immigration Service (NIS).

The official decoration of the honouree, which was held at the embassy of Spain in Abuja, Nigeria’s federal capital territory (FCT) earlier in December, had in attendance representative of the country’s minister of foreign affairs, Geoffrey Onyeama; special adviser to President Muhammadu Buhari on ease of doing business, Jumoke Oduwole; chief of mission for the International Organisation for Migration (IOM) in Nigeria, Frantz Celestin; director of the private sector and industry at the Economic Community of West African States (ECOWAS), Tony Elumelu, among many others.

Presented on behalf of the King of Spain, Felipe Juan Pablo, the Spanish Ambassador to Nigeria, Marcelino Ansorena, said Babandede is the first Nigerian in many years to be bestowed with such an honour.

He said apart from recognising the quality, competence and contributions of a Nigerian to both national and international security and protection of the rights of the vulnerables, the honour also serves as a symbol of strength for the ties between Nigeria and Spain. 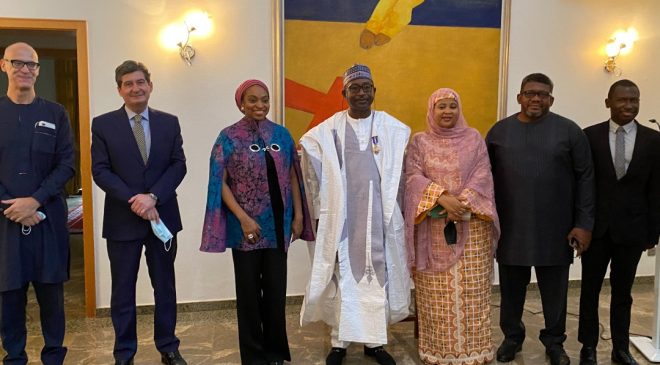 The ambassador, who said he has worked closely with the honoree within the last four years of his stay in Nigeria, said; “This is in recognition of the excellent work of a man who has devoted his life to the progress of his country and as well his relationship with other countries. His work has been very important to the international community. This award is meant for people who have done extraordinary works for their countries and in their relationship with Spain.

“This is called the Order of Civil Merit, and so it is a civil recognition done by His majesty, the King of Spain. It is given to few people who really deserve it, and I must confess that Mr Babandede really deserves it as a distinguished Nigerian to wear the honour of this order of merit.”

Mr Ansorena said apart from him making the recommendation to the King of Spain after many criteria must have been met, it was still the responsibility of the authorities of the nominee’s country to approve the proposal.

“In the selection process, the ambassador has something to do. I proposed it and recommended it to the King of Spain and after much consideration and consultations with the authorities in Nigeria, this was granted. This is because of the work we have done together and the issues we have worked on together are very important because they form Spain’s priorities. 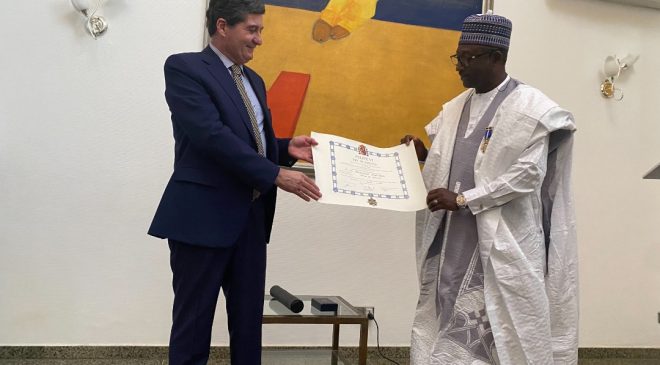 The Spanish Ambassador and Babandede shortly after the decoration

“So the honouree is recommended based on our works to fight against trafficking and smuggling of most vulnerable persons and especially women. He has worked also to stimulate legal migration, integrate societies and to fight illegal migration. We have worked very closely and he has summed it up with his very kind manners and as a gentleman he now has a new objective of working with children. So we will continue our relationships and our work together.”

Mr Babandede, who is a holder of the Member of the Order of the Federal Republic of Nigeria (MFR) said he was proud to be recognised both at home and abroad. He thanked the President for approving his recognition, saying the process that led to the decoration took almost a year.

He said; “I am glad today to be bestowed this honour. I may be the first to be so honoured and this speaks a lot about my personality and greatness of this country. The good job that we have done under this administration of President Muhammadu Buhari has been recognised by another country. I think we should be proud, and I thank Mr President for approving it. This is because when this honour was proposed, the process took almost one year. It was submitted to the government of Nigeria for comment and President Buhari gladly approved it.

“So I really thank Mr President for giving me the privilege to serve and for approving this honour for me. As a holder of MFR and now I have a similar honour bestowed on me by the King of Spain which means that I belong to the special club which Spain recognises and which is accepted globally.”

The honouree, who said he joined his lastborn to support Real Madrid football club of Spain, noted that apart from presenting the good sides of Nigeria to the world, the duo countries could develop partnerships in the areas of soccer, among other business innovations.

“With this kind of honour I think we can bring on board good business relationships between the two countries, respect for human rights among us, and also since Nigerians enjoy football and are great fans of La Liga league, we should see what more we can benefit from that,” he added.

In his company were his wife, Gadatu Babandede; son, Shamsudeen Babandede, and selected friends and aides.

Mr Onyeama, who was represented by a counsellor in his office, Miriam Udeozo, said he was not surprised with the honour bestowed on the “distinguished Nigerian,” saying his tenure as the comptroller general of the NIS witnessed a lot of transformations and innovations.

He said; “I am not surprised that the government, people and the embassy of Spain deemed it very necessary to extend this distinguished award for services well rendered on this illustrious Nigerian citizen, who really distinguished himself at the helm of affairs of the Nigeria Immigration Service. He brought about lots of transformations to ways and manners in which government businesses were conducted within the Service, which led to robust and efficient service delivery to the people in line with Federal Government policies.

“His good nature, charisma and kind heart have endeared him to so many, among which are the Government and people of Spain, who today have chosen him to be honoured with this great award.”

The President’s special adviser on ease of doing business, Mrs Oduwole, also commended the embassy for finding the honouree worthy, saying Nigeria is not only hospitable but a destination for global investors.