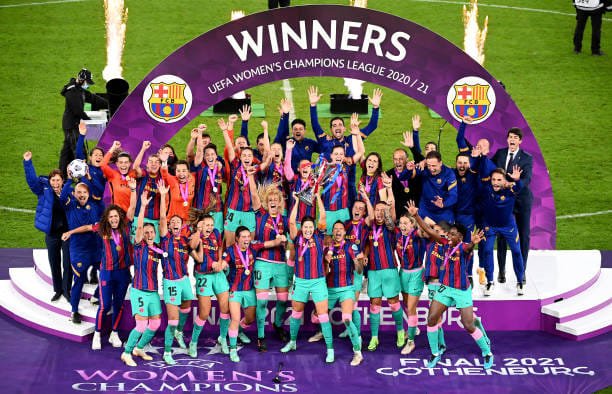 Nigerian striker Asisat Oshoala was a late substitute as Barceloca produced an emphatic display to brush aside Chelsea 4-0 in the Women’s Champions League final on Sunday.

It was the Spanish side’s first title and they did it in style at the Ullevi stadium in Gothenburg, Sweden, thumping the English champions.

Oshoala, who had been out of action with injury, was brought on as a 71st minute substitute for Jennifer Hermoso, after passing a late fitness test.

Barcelona took the lead after the ball rebounded off Melanie Leupolz for an own goal after hitting the crossbar.

The Catalans soon doubled their lead through Alexia Putellas, who scored from the spot in the 14th minute after Hermoso was adjudged to have been fouled in the box.

The two-goal lead soon became three in the 20th minute when Aitana Bonmati waded off pressure from Jessica Carter to slot the ball into the net after a through pass from Hermoso.

Barca completed the rout in the 36th minute with a simple tap-in from Caroline Hansen.

Oshoala had the opportunity to make it five, but was denied by a last ditch tackle by Niamh Charles. She also had the ball in the back of the net, but it was ruled out for offside.

The four-time Africa Women’s Footballer of The Year had been involved in Barca’s previous appearance in the final – a 4-1 defeat to Lyon – where she scored her team’s solitary goal.