Museveni to surrender Uganda's only international airport over Chinese loan 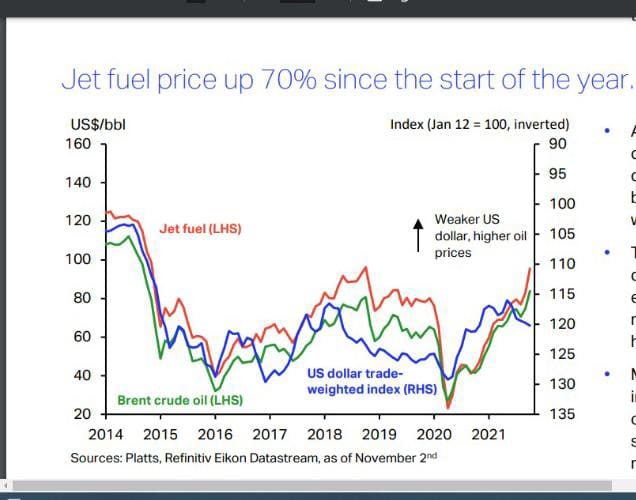 The International Air Transport Association (AITA) has said the price of jet fuel has continued to increase in recent weeks, with its price increasing by 70 per cent since the start of 2021.

According to IATA, the Switzerland-based trade organisation representing over 290 international airlines, the increase in Jet A1 price is putting pressure on airlines’ operating costs and threatening the industry’s profitability.

The association disclosed this in its ‘Airlines Financial Monitor’ which was released on Tuesday. The body said in the report that as of early November, jet fuel price was 70 per cent higher compared to the start of the year.

“At the beginning of November, the price per barrel of jet fuel was at US$96.1, +70% year-to-date. The price increase has been driven by swiftly recovering demand as markets reopen around the world and economic activity restarts. Meanwhile, supply has remained tight since an increase in OPEC+ production has been slow.

“Many airlines have been voicing concerns about the impact of rising fuel costs — airlines’ largest operating cost item — on their financial recovery. Q4 tends to be a seasonally weaker quarter for airlines passenger revenues so the fuel price increase represents an unwelcomed challenge,” the report read.

IATA added that airline stocks dropped across all regions in October because of rising aviation fuel price on airlines’ operating costs.

According to the Airlines Financial Monitor, the global airline share price index has been below pre-pandemic levels throughout most of 2021, with uncertainty about pandemic outbreaks and their impact on the air travel recovery.

The IATA said, “The initial Q3 2021 results show that financial losses of airlines at the aggregated level diminished compared with Q2 2021, with some carriers reporting their first profitable quarter since the crisis started. In the sample of 27 airlines, the industry-wide EBIT margin improved to -2 per cent of revenues in Q3.”

According to the IATA, passenger revenues have declined by 34 per cent in Q3 2021 compared with the pre-crisis Q3 2019, while cargo revenues have risen by 65 per cent over the same period amidst increased cargo demand.

It added that total airline revenues were down by 30 per cent and the rising aviation fuel price was increasing pressure on fuel costs.