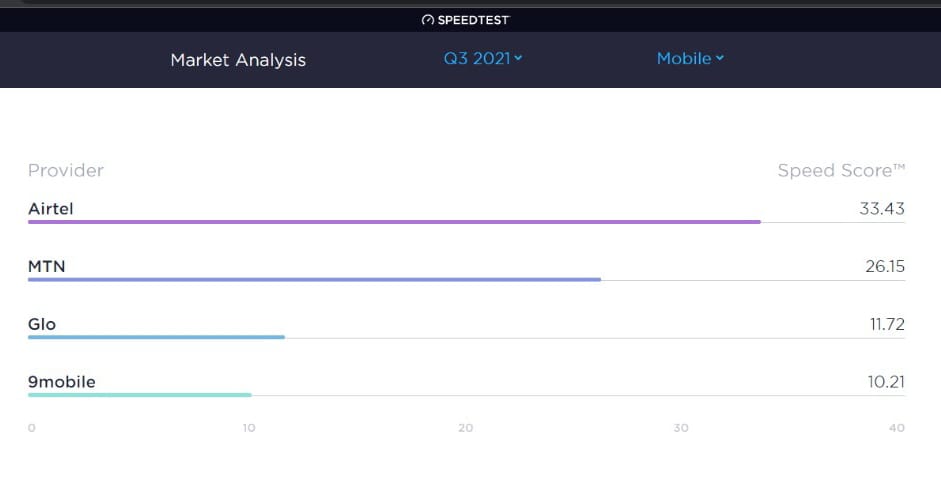 A report released by Ookla, a global leader in mobile and broadband network intelligence, testing applications and technology, has rated Airtel as the fastest broadband in Nigeria.

In the report, it was stated that Airtel Nigeria topped the chart with a 33.43 in the third quarter of 2021, indicating a 17 per cent growth rate from the figures reported in the first half of the year.

The Ookla Market report, which shows the state of Nigeria’s mobile and fixed networks, further showed that the figures show steady, significant growth from the 27.18 it recorded in the first quarter of 2021 and the 28.82-speed score recorded in the second quarter of the same year.

Coming second as the fastest network speed in this report was MTN Nigeria as it recorded a speed score rating of 18.70, 25.87 and 26.15 for the first, second and third quarters respectively.

Other telecom brands in the Nigerian market, Glo and 9mobile recorded speed score ratings as low as 11.72 and 10.21 respectively.

According to the telcos financial report for the quarter, this data revenue accounted for about 35.4 per cent of total revenue in the year and similarly, average data consumption per user also rose from 1.9 GB per month to 3.2 GB per month.

Things get better for Airtel in Q2 when its data revenue rose by 48.8 per cent to hit $171 million, up from $152 million. This represented the highest growth percentage witnessed by any segment of the telco.

This was chiefly driven by rise in its data average revenue per user (ARPU) that rose by 41.5 per cent and thus, supported by a 42.2 per cent increase in data consumption per customer as average data consumption rose to 3.8 GB per month.

This is a 7 per cent increase from the previous quarter when Airtel had a consistency score of 82.5 per cent, which was 0.9 per cent lower than MTN’s.

“This quarter we’ve provided updated analyses for 43 markets that includes details on fastest mobile and fixed broadband providers, performance of most popular devices and chipsets and internet speeds in cities,” Ookla said on its official website.

Related Topics:AirtelBroadbandOokla Market Report
Up Next